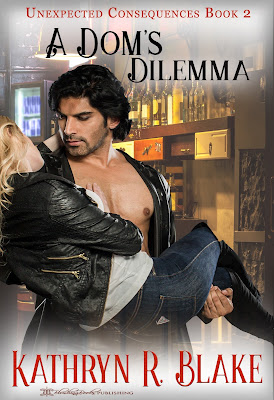 This scene in A Dom's Dilemma occurs near the end of Chapter Six.  Jim and Kelly are just starting to get to know each other when Jim discovers Kelly is still sore from the enema and examination he gave her a half-hour ago.  She knows that means he will want to examine and treat her, but she really wants to avoid having him touch her back there again, if it's at all possible.  It isn't, but Jim compromises by making the experience as pleasurable as he can.  However, he's a Dom, so there are some rules Kelly will need to follow.  Rules like forbidding her to come until he gives his permission. The sort of rules he fully expects her to break. Of course, when she does, a good Dom needs to provide the proper discipline his sub requires and expects, but he can also add pleasure to the experience, if he chooses. Afterward, he holds, cuddles, and reassures her until her tears have dried.

His eyes radiating strong disapproval, he said, "Well, since you refuse to say what happened, I've got to assume there's no problem. Because a good sub would never hold something so important back from her Dom. Right?"

When Kelly winced, her clever Dom reached over and pinched her chin. "You know I'd be real gentle with you, don't you?"
She nodded reluctantly. He would be as gentle as possible, but as sore as his exam left her, she also knew sex with him was going to hurt, since she'd place the instrument he'd used into the peewee division if the two were ever entered into a contest of comparisons. The long, thick object pressing against her hip was far too intimidating, by her way of reckoning, and she wasn't a quailing virgin by any means.

Jim is into control, not pain, and he wants Kelly to find pleasure in everything they do together, but the Dom in him insists upon taking the lead.  Things will happen his way, and on his terms.  End of story. Although Jim finds a great deal of satisfaction in Kelly's enthusiastic response, and her trust is of paramount importance to him, his role as a Dom requires him to hold her accountable when she lies or disobeys. And he knows the cuddly armful currently resting on his lap is hiding the truth from him.

A Dom's Dilemma can be found at Blushing Books.
Currently on sale at Amazon for $2.99 or free on Kindle Unlimited Kindle

Thanks for visiting.  Now go visit the other authors participating in Book Hooks.
Posted by Kathryn R. Blake at 12:30 AM