When a drag queen club manager's crazy world collides with a rock star's chaotic life, is there a chance their relationship can survive? 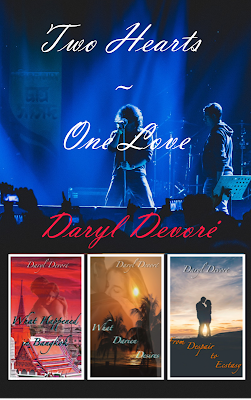 She climbed onto the bed, straddled him and settled her hips on his. The vision before him was electrifying, her cute short hair, those fabulous grey-blue eyes, and that body that gave him an instant hard-on.

“What’re you grinning at?” She opened the bottle of massage oil.

“The view. I love the view. Of you.” She bounced as he chuckled. “I could write that into a song.” He sang, “I’m so in love with you. The view of you. Your gorgeous breasts. Breasts. Breasts. I’m stuck on your breasts.”

“You silly.” She slapped his belly. “I should hop off and go sleep in another room.”

He snapped his mouth closed, shook his head, crossed his heart and held up his hand.

“Somehow, I doubt you were ever a Boy Scout. Let’s see. Punishment for a bad boy.” She glanced around the room. “Ah.” Jumping off the bed, Erika dashed to the closet, pulled a belt off one of the bathrobes and returned.

She loosely bound his wrists, tying the other end to the bedpost. “Now, where was I?” She settled back down on his hips, grabbed the bottle of oil, then popped the lid.

Erika grinned as she waved the container. “Betcha thought I was going to rub this on you to ease out some of the aches in your muscles. Well, you’d be wrong. I’m gonna make every muscle in your body tense and scream for me.”

She tilted the bottle, pouring the oil between her breasts. It dribbled down her belly and puddled in her belly button. Using her middle finger, she stroked her oiled flesh from the top of her chest to where the material covered what he desired. She wiped her finger dry, stroking it across his nipples. They responded to her touch.

He sniffed. Cinnamon buns. The warm fragrance from the bakery where he grew up tickled his nose.

Picking up the bottle, Erika poured more liquid into her left hand, pressing it against her right breast. With her palm, she circled her hand around, spreading the oil. She stroked under her breast, up and around, drawing a spiral pattern closer and closer to her nipple, then flicked her finger across the tight peak.

Darien’s eyes stung, reminding him to blink. “You look so hot doing that.”

“Guess I’ll just have to repeat everything on the other side.” She poured the scented massage oil into her right hand and echoed what she’d done — rubbing, stroking, and flicking.

The oil’s fragrance wafted on the air.

She wiggled her hips. The motion made Darien grunt and flex every muscle. The heat of his sexual tension caused a bead of sweat to form on his brow, even though he was stretched out naked on the bed.

After oiling her hands, Erika slid them under the lace and rubbed her nipples. She closed her eyes while rocking her hips.

Darien struggled against the restraining belt. The loose knot tightened. He froze. He wanted to touch her. To lick the oil off her breasts. Being restrained was torture. He loved it. 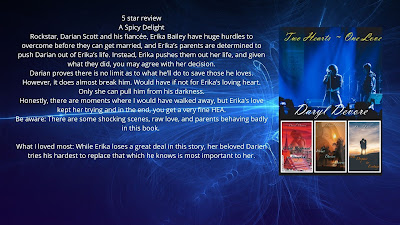 When a drag queen club manager's crazy world collides with a rock star's chaotic life, is there a chance their relationship can survive?

Erika Bailey, owner/manager of The Pink Flamingo, a drag queen club in Bangkok, Thailand has happily settled into all aspects of her life, except for her lack of a love life.

Darien Scott, a Grammy award-winning, international superstar, wants nothing more than to wake up in the arms of the woman he loves. Too bad contractual obligations force him to shoot hot videos with some of Hollywood's sexiest stars.

Yet, Erika and Darien found a way to each other’s arms.

But between suspecting her father ordered the torching of her club, and her mother’s humiliating drunken behaviour, Erika’s trust in those she loves is crushed. With all her parents put her through, how can she trust Darien?

Concerned for Erika’s safety, Darien races to Bangkok to protect her only to discover his brother is missing. Fearing the worst, he contacts his nemesis, Gan, and makes a repulsive deal that will free his brother and protect Erika’s club. Or so he thinks. Because when Gan is involved, things always go sour. This time is no different, and Darien sinks into a deep depression.

Is Erika’s love enough to pull him back and into her arms forever?

Bonus – exclusive to the box set – a special 2-part interview with Darien Scott.

Two writers in one. Daryl Devoré writes hot romances with sexy heroes and strong heroines and sweet romances with little to no heat. She has several published books available on Amazon in ebook, print and audio. Also, available at other book retailers via Books2Read.

Every Other Month Newsletter (always looking for subscribers)