From the Lawbreakers box set, Daryl Devore brings us a tempting snippet from her contribution "Two Truths and a Lie."

The legend of Robin Hood and Maid Marian with a twenty-first-century twist. 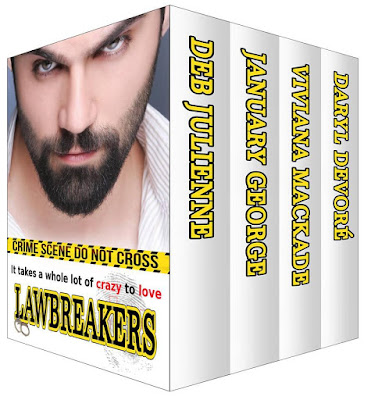 
All I had to do was steal a rare, red diamond. How hard could that be?

I followed the others into the Whittle Bus, took a seat and turned to look out the window. I didn't want a seat buddy. I didn't want a BFF – someone to giggle and bond with. I had a job to do. I had to keep my focus.
Especially if I wanted to live.
I stared blankly out the window, not seeing the city shift to country. Music blared from the bus's sound system. The driver turned the radio on an All 80s channel. Trying to block the music, I reviewed my evening. First, act like a meek female, not too competent or intelligent who doesn't speak English fluently. Second, pretend to be an acceptable server and deliver drinks to thirsty, rich people. Third, steal the red diamond.
Simple enough.
I didn't want the gem. Hmph, who was I kidding? I'd love to own it. But, a job's a job. I'd been commissioned to steal and deliver it to a secure box. And that's exactly what I intended to do. I'd planned this job for several weeks, if not months. Finally, the right opportunity presented itself and here I was sitting on a bus listening to You Spin Me Round, dressed like a French maid. So unbelievably annoying. The skirt barely covered the bend in my butt. Every time I tugged at the skirt, my boobs started to pop out of the top. Not that there was a lot of boob to pop out. I seemed to be missing the greatly endowed gene. I stifled the fantasy of putting my fingers around the neck of the old pervert that demanded we wear these ridiculous outfits. And gloves. We all had to wear white gloves. Who does that?
I'm guessing the host of the party didn't want us mere peasants touching anything, leaving our filthy germs which he might pick up and then die of some horrible flesh-eating disease. Hey, a person can dream.
But on the bright side, the gloves played right into my hand, so to speak. I didn't have to figure out how to conceal a pair of latex gloves. I'd wear these white monstrosities, steal the red diamond and not leave a fingerprint in the whole house.
The bus slowed, passed through the open gates then drove around to the back of a large manor house. I'll admit the house wasn't as big as the one in Downton Abbey, but it was still impressive. A red stone house with several floors, lots of windows and partially covered in ivy. The land around it extended for acres in every direction. I'd already done my research on the place. I knew every inch of the outside and inside. I had escape routes planned. Although, I had no intention of needing them. I was confident I was leaving the same way as I'd arrived – on this bus.
I knew where I could hide in the house if needed. And I had a back-up plan to my back-up plan. Several people had been paid hefty fees to watch my back. This gem was as good as stolen. 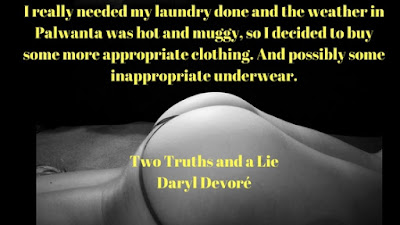 If you love hot, billionaire romances, then this is a must read.

From the author of the Two Hearts One Love Trilogy, multi-published, hot romance author Daryl Devoré's latest book revolves around deceit, betrayal, passion and the theft of a multi-million-dollar, rare, red diamond.

As if multiple planes crashes, a car accident, and a concussion isn’t enough, carefree Byn and straight-lace billionaire, Mark clash over Byn's need for independence and Mark's struggle with guilt pushing him in the opposite direction of love. When an art forger, an art thief and a ninety-year-old woman get involved the chance for true love for Byn and Mark fades.

All is lost until a children's game is their only hope.

Daryl (@daryldevore) lives in an old farmhouse in Ontario, Canada, with her husband, a black cat named Licorice and some house ghosts. Her daughter is grown and has flown the nest. Daryl loves to take long walks on her quiet country road or snowshoe across the back acres, and in the summer, kayak along the St. Lawrence River. She has touched a moon rock, a mammoth, and a meteorite. She’s been deep in the ocean in a submarine, flown high over Niagara Falls in a helicopter, and used the ladies room in a royal palace. Life’s an adventure and Daryl’s having fun living it.

Today, Kryssie Fortune is on our guest couch to share a snippet from book 2 in her Scattered Siblings series, which was originally released under the title "Curse of the Fae King."

Before we get started, I asked her for more information about her paranormal series. This was her reply:

My Scattered Siblings series is a collection of stand-alone tales set in a magical world. The plants are man eating, the Elves misogynistic, and the Lykae and Fae take the heroines’’ breath away with their ferocity and good looks. I love the way the earlier characters crop in cameos throughout the series. It’s like a party with all your best friends invited.

If he doesn’t bed a different women every month, he’ll turn feral. 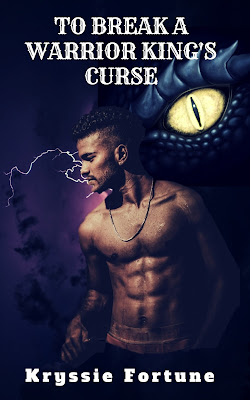 
Meena almost retched. Everything she learned about the Elves made her hate them more. “That potion. What was it?”
“Distilled musk taken from a female rat as she comes into season,” her companion whispered.
“Randy rat juice?” Meena spluttered. “And I drank it.”
A second woman entered, carrying short lengths of rope. “And soon, just like an animal in heat, you will burn for the touch of a man.”
The outer door swished open then someone closed it with a bang. She didn’t care that she was naked and defenseless. She just wanted the victor to screw her hard and fast. Or maybe slow and easy. Perhaps both. In her best dreams, he brought a friend.
Her raging hormones didn’t care as long as someone relieved the burning need between her legs. Another wave of desire hit her, shooting fresh longings to her sensitized nerve endings. Her need blossomed into pain—intense, clear, and sharp. She trembled. She needed. She wanted. Goddess, if she didn’t come soon, she’d explode. She heard a flint strike, and a candle cast eerie shadows across the entry room.
In the name of the collective covens, I’m in here. Get a move on. Please.


The scent of chocolate and chili assailed her, and then Leonidas strode to her side. Face stern, he spun on his heel and shoved a chair against the door handle. He moved to the bed, towering over her as he stared at her face through the flickering candlelight. He frowned as, back arched, hips rolling, she demanded, “Don’t just stand there. Fuck me.” 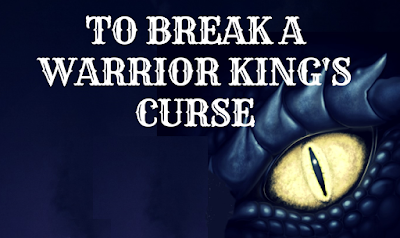 Leonidas can fight anything except dark magic.

He inherited his father’s curse along with the Fae throne. Thanks to a rogue witch, if he doesn’t bed a different woman every month, he’ll turn feral. A man can only stand so much meaningless sex. No wonder he hates witches.

When he meets Meena, he intends to seduce her, not love her.

Meena’s a witch who never developed any powers.
Banished to the mundane world, she masquerades as human. When she accidentally bonds with an escaped war dragon, Leonidas comes to reclaim it. His enemies strip him of his powers, and his month’s almost up.

What happens when he discovers she’s a witch? And how will this warrior king cope when his curse kicks in and forces him into another woman’s bed.

PLEASE NOTE This book was previously sold with the title CURSE OF THE FAE KING.


Kryssie reads everything and anything, from literary fiction to sizzling romance. Her earliest memory is going to the library with her mother. She can’t have been more than two at the time. Reading, especially when a book’s hot and explicit, is more than a guilty pleasure. It’s an obsession.

Kryssie needed a world for her Scattered Sibling adventures. With its green sky, carnivorous plants and rats bigger than cars, the otherworld is a violent place. Lykae, Fae, and vampires all live there. If the characters come to our mundane world, they often visit the North Yorkshire resort town of Whitby—British home of all things gothic and weird.  For Kryssie, mixing reality and fantasy is the best entertainment.

This year, Kryssie’s main publisher—Loose id – decided it could no longer compete with Amazon. Sadly, they close their doors permanently in May. For Kryssie, getting her book rights back is a chance to go indie. To Break a Warrior King’s Curse is the first book she’s self-published

And the title change?

When she started writing, Kryssie didn’t realize how much she’d fall in love with the otherworld. All her Scattered Sibling’s series books have a title starting with TO…  She simply brought this in line with the rest.  Please, read and enjoy