Cold and hungry, Kelly Franklin was down on her luck when a gentleman stepped in, paid for an hour of her time, fed her, then made a proposition she never expected, but couldn't afford to turn down. 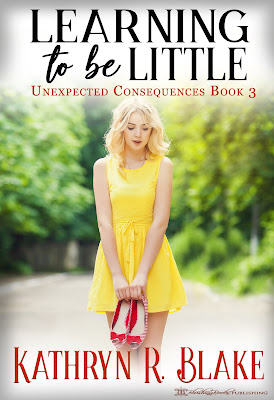 In this scene, which occurs in chapter five, Kelly has just received her first serious spanking from her daddy, and though she's subdued, the issues that originally caused her to act out have not entirely been resolved to her satisfaction. All the same, she has no wish to cause him to discipline her again.

Once Kelly had calmed down, Daddy helped her into her panties and led her to the kitchen where he tossed out her uneaten oatmeal and fixed her toast with strawberry jam instead.
"Do you do all your own cooking?" Kelly asked as he laid the plate in front of her.
"You may feed yourself this time." When she picked up one of the slices, he replied, "No. I have a cook who comes in weekly to prepare our dinners, but I usually make our lunch and breakfast, since I want alone time with my little girl."
"Is the cook aware of your—arrangements?"
"Yes, she is. She used to be a nanny for an adult little girl in England, so she can be a very strict taskmaster. I would suggest you stay on her good side as she uses a bath brush as a paddle."
Kelly winced. "You'll let her spank me, too?"
"Only if I'm not here. If you're bad when she's alone with you, she has my permission to punish you with a spanking and/or corner time."
Kelly's eyes started to burn again. The thought of a strange woman doing what he'd just done bothered her deeply.
"Hush, little one," he murmured, drawing her back onto his lap. "There's no need for tears. Nanny-cook will only punish you if you're bad."
"I don't want that," she insisted, pressing her face to his chest. Kelly loved the way he held and comforted her. It brought back memories of her real daddy, which made her a little sad.
Rubbing her back, he rocked her. "We'll see. I expect you to be a good little girl, so I don't understand the problem, but if the thought distresses you so much, I'll consider limiting her spankings to corner time and a handful of barehanded swats to your bottom. Will that ease your mind any?"
Kelly drew back and blinked at him. He really did want her to be as comfortable with him and their odd arrangement as possible. "Can't she do something else besides spank me?"
"Like what?"
"Perhaps corner time and removal of some of my privileges?"
"She's worked with me for several years, and I trust her. I've never had a daughter utter one word of complaint about her, and I've had five adult little girls over the past twenty years."
The fact she was the sixth adult little girl he'd had brought home made her realize her current position was tenuous at best. They'd agreed on a month's trial. Perhaps he'd done that with those other little girls as well, and they'd chosen to leave. Then again, what if Nanny-cook drove them away?

At the moment, one month seems an awfully long time to Kelly. The gentleman who insists upon treating her like his daughter is very strict and determined things be done the way he decides is best, though she sees a glimmer of hope in the way he takes her feelings into account.

When hunger and cold induce Kelly Franklin to accept a stranger's offer, she has no idea how drastically her life will change. Offered a chance to live the childhood she was denied, Kelly discovers a new-found freedom in allowing someone else to make all her decisions. And though it takes her awhile to fully accept the changes expected of her, by the time Kelly gleefully embraces her little girl, she is forced to re-evaluate her life.


Learning to be Little is currently available for sale at Amazon.

Thanks for visiting.  Now go visit the other authors participating in Book Hooks.
Posted by Kathryn R. Blake at 2:00 AM