4 Stories for less than buying them individually 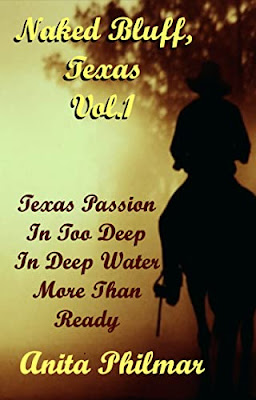 Furious, Catherine Jensen refuses to allow her dream of marrying Trent McCall to fall into ruins because of an end-of-the-trail party. Not wanting him to sleep with a painted lady or two on the eve of their engagement, she arranges a seduction. But at what cost? Will it secure their future or ruin her squeaky-clean reputation?

Excited to celebrate his success of completing a long cattle drive with a sexy lady, Trent is blindsided with the news of an arranged marriage between him and a girl he hasn’t seen in four years because she’d hightailed it to Boston.

Now a city girl, she’d probably turn out to be just like his family’s deserting momma, who’d bailed when the going got tough.

Pissed, his bad mood eases when he learns a special lady was meeting him at his hunting cabin. With the future uncertain, he figured a passion-filled night might lighten the load of his matrimonial chains.

Furious with her in-laws’ demands to marry her deceased husband’s brother, Sadie Pepperman heads for the Trinity River with a friend to escape the pressure of their unsolicited advice.

Seeking an adventure, Callum Murphy and his friend, Marcus Goodman, are heading to the Gulf of Mexico to join the confederate army. Their quiet camp is interrupted by a lady’s scream. Spotting a woman in the swiftly moving water, Marcus jumps to the rescue, followed almost immediately by the rumble of wagon wheels along the dirt path, accompanied by a beautiful lady calling for help.

Attempting to save her friend, Sadie meets Callum and joins forces. Only to discover their friends are being hauled onto a steamship. Eager to get away from temptation, she turns to leave and twists her ankle. The agonizing pain leaves her with the inability to walk. To avoid asking her in-laws for help, she offers Callum a place to stay if he’ll help with her farm’s chores.

Enamored with the lady, he discovers she has a few issues; crops to bring in from the fields, a sex starved brother-in-law, and a body which inflames his desire. One problem, however, worries him. Can he convince her to forget the other rascals in her life and give him a chance?

Hot? Yes, Texas summers sizzle. Lured by the brilliant idea of dipping naked into the Trinity River, Carolyn Evans wades into the water and is captured by the swift moving current, putting her life in danger.

Help! The cry sends Marcus Goodman, who’s on his way with a friend to the Gulf of Mexico to join the confederate army into the river to save the naked lady. The only problem is a passing steamboat has the same mission, placing him in a ticklish situation when they’re pulled aboard, and she claims they are married.

Tempted by the adventurous opportunity and enthralled with the sexy woman, he holds her to the claim of matrimony. Will this end with a happy-ever-after union or a soul-crushing heartache?

Depressed by his inability to honor his deceased brother by farming his land and wedding his wife, Kirk Pepperman is struggling with his bleak future.

Perpetually cast as the girl next door, Mary Beth Owens knows her parents are arranging a marriage between Kirk and herself. Loving him wasn’t a problem, but if he couldn’t please her, then why bother?

Can this couple forget the past and have a future together?