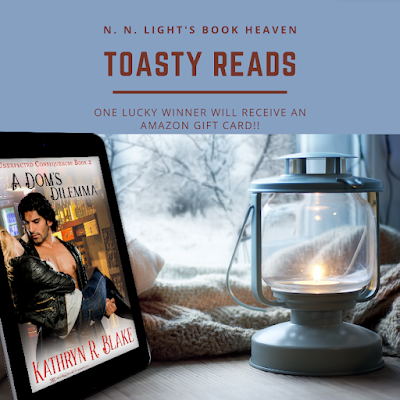 Cuddling by the fire with warm chocolate is something Dom's enjoy, too. So, I'm tickled pink to announce that Kelly and Jim are taking part in N.N. Light's Toasty Reads event.
https://www.nnlightsbookheaven.com/toasty-reads-bookish-event
You can read my excerpt for them by clicking the link below:
https://www.nnlightsbookheaven.com/post/a-dom-s-dilemma-trbe
There's also a Rafflecopter giveaway being offered. Enter to win a $17 Amazon gift card:

Open Internationally. You must have a valid Amazon US or Amazon Canada account to win.

So come join the authors for this warm and toasty event held near a glowing fire. 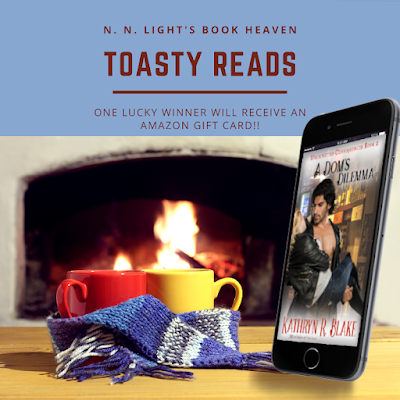 Kelly Franklin is not your "normal" submissive. In fact, there's some question as to whether she's a submissive at all. She seeks the protection a Dom can give her without paying the price a Dom exacts. Unfortunately, when Master Evans takes her in hand, she pays double.

As a Dom, Jim is pleased by Kelly's open responsiveness, but as a police detective, he is determined to solve the enigma she presents.  When he discovers Kelly has not only been keeping secrets from him, she has lied, he is more than willing to drape Kelly bare butt over his knee for a spanking--until she finally tells him the truth. 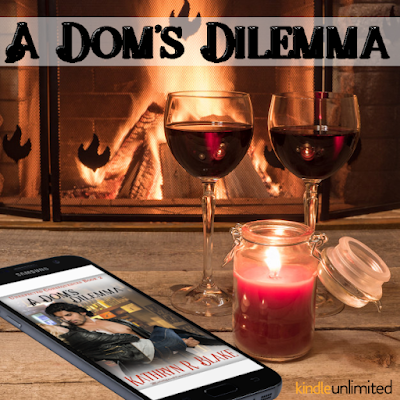 The ride to her apartment so smooth, Kelly floated into a twilight sleep. It seemed like only seconds had passed before Jim was opening her door again. Taking his hand, Kelly stepped out of the car, all-too-aware of the firm palm settling at her waist before she was briskly escorted inside. Uh oh. It didn't matter if she wanted him to come upstairs or not. This Dom intended to make sure she was settled before he left, and expected her to go along with his wishes without comment. Kelly made no dissent, since even hinting at an objection would most likely get her in trouble again. Despite his arrogance and marked tendency toward bossiness, his determined mindfulness of her welfare caused Kelly to feel desired and protected, but it didn't solve her problem.

She hadn't cleaned in weeks.

Too embarrassed to let him see how she lived, Kelly balked at asking him in. So, when they got to the door of her fifth floor apartment, she held her hand out.

He grasped her wrist, pulled her close, kissed her and extended his palm. "Keys," he ordered.

Sighing, Kelly dug around in her purse and slapped them into his hand. She received an arched eyebrow in return.

"Look, the place is a mess," she admitted. "I wasn't expecting anyone to come home with me."

He gave her chin a light pinch. "Kelly girl, I'm not here to inspect your housekeeping skills. I'm here to make sure you're tucked in safe and sound. So, relax."

When she sighed in response, he regarded her with a frown. "Yes, Sir," she answered, though even she heard the petulance in her tone.

Choosing to ignore her ungracious attitude, he opened her door, grabbed her hand and pulled her behind him as he walked through her apartment, thoroughly checking the place out. She tried several times to tug free so she could at least pick up the pile of dirty laundry she'd left scattered on the couch, but he refused to let go. Left with little choice except to obey, she followed him around and continued to apologize as he went through and searched every room, including her small laundry area. By the time she'd uttered her tenth 'sorry', he turned and drew her into his arms.

"Would you stop apologizing, woman? If you're so upset about it, we'll work on your organizational abilities as a project. At least I'm getting an idea of how you live."

"That's what I'm afraid of," she muttered under her breath.

Kelly received a firm swat for her flippant response along with an order to shush. Even though none of her clutter seemed to faze him, she could tell he was making mental notes, which made her stomach churn with unease. The churning turned into a full-fledged dread, however, when he began sorting through her stack of unopened mail.

James Evans senses a deep, dark wound from Kelly Franklin's past has made her reluctant to give anyone her full and honest submission, but he also knows it's dangerous for a sub to keep secrets from her Dom. So, he intends to uncover the truth about his reluctant sub's past, whether she wants him to or not.
Posted by Kathryn R. Blake at 4:00 AM No comments: