Mistletoe, Holly and Poinsettias - Find out why they are associated with Christmas #Holiday #Tradition 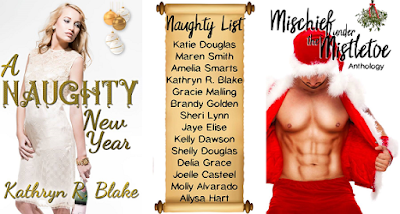 First we break for a commercial. The Mischief Under the Mistletoe Anthology is now available for order at Amazon. If you pre-ordered it earlier, it should be on your device already. If you haven't, why not? For this week only, it will be on sale for 99 cents, then it's up to $6.99. More money for me, if you wait, but I'm only thinking of you...

Are you excited, yet? If you can't tell, we are. And to celebrate the release of Mischief under the Mistletoe, and my holiday novella, "A Naughty New Year" that's included in it, I thought I'd share some fascinating tidbits I've gathered about the three plants I associate most with the holiday.  Mistletoe, Holly and the Poinsettia.

The Druids believed mistletoe fell from heaven and grew onto a tree that sprang from Earth. Mistletoe thus represented the joining of heaven and earth, and God's reconciliation with mankind. A kiss under mistletoe symbolized acceptance and reconciliation.

The custom of using mistletoe to decorate houses at Christmas is a survival of the Druid and other pre-Christian traditions. According to custom, the mistletoe must not touch the ground between its cutting and its removal as the last of Christmas greens at Candlemas; it may remain hanging through the year, often to preserve the house from lightning or fire, until it is replaced the following Christmas Eve. Although the tradition has spread throughout the English-speaking world, it is largely unknown in the rest of Europe.

The Greeks also thought that it had mystical powers and down through the centuries it became associated with many folklore customs. In the Middle Ages and later, branches of mistletoe were hung from ceilings to ward off evil spirits. In Europe they were placed over house and stable doors to prevent the entrance of witches. It was also believed that the oak mistletoe could extinguish fire. 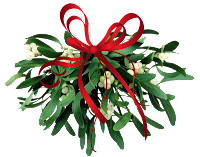 In Scandinavia, mistletoe was considered a plant of peace, under which enemies could declare a truce or warring spouses kiss and make-up. Later, the eighteenth-century English were credited with giving the plant a certain magical appeal they called a kissing ball. At Christmas time a young lady standing under a ball of mistletoe, brightly trimmed with evergreens, ribbons, and ornaments, cannot refuse to be kissed. Such a kiss could mean deep romance or lasting friendship and goodwill. 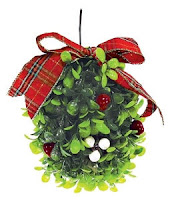 The earliest documented case of kissing under the mistletoe dates from 16th century England, a custom that was apparently very popular at that time. According to custom, a man and a woman who meet under a hanging of mistletoe were obliged to kiss. The custom may be of Scandinavian origin. It was described in 1820 by American author Washington Irving in his "The Sketch Book of Geoffrey Crayon":
"The mistletoe is still hung up in farm-houses and kitchens at Christmas, and the young men have the privilege of kissing the girls under it, plucking each time a berry from the bush. When the berries are all plucked the privilege ceases."

This plant's association with Christmas began in 16th century Mexico, where legend tells of a young girl who was too poor to provide a gift for the celebration of Jesus' birthday. The tale goes that the child was inspired by an angel to gather weeds from the roadside and place them in front of the church altar. Crimson "blossoms" sprouted from the weeds and became beautiful poinsettias. From the 17th century, Franciscan friars in Mexico included the plants in their Christmas celebrations. 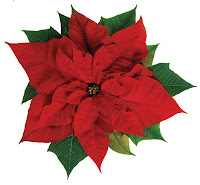 The shape of the poinsettia flower and leaves are sometimes thought as a symbol of the Star of Bethlehem which led the Wise Men to Jesus. The red colored leaves symbolize the blood  sacrifice through the crucifixion of Jesus. The white leaves represent his purity.In Spain it is known as "Flor de Pascua", meaning "Easter flower". In both Chile and Peru, the plant became known as "Crown of the Andes".

Poinsettias are popular Christmas decorations in homes, churches, offices, and elsewhere across North America. In the United States, December 12 is National Poinsettia Day.

In pagan times, Holly was thought to be a male plant and Ivy a female plant. An old tradition from the Midlands of England says that whichever one was brought into the house first over winter, tells you whether the man or woman of the house would rule that year! But it was unlucky to bring either into a house before Christmas Eve. 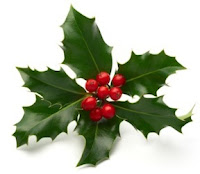 Today, Christians consider holly symbolic of Jesus Christ in two ways. The red berries represent the blood that Jesus shed on the cross on the day he was crucified. Legend states that holly berries were originally white, but that the blood Christ shed for the sins of humankind stained the berries forever red. A holly's pointed leaves symbolize the crown of thorns placed on Jesus' head before he died on the cross.

The early Christians also believed the fact that the Holly helps in driving away the evil spirits as it is endowed with some magical powers. So, during Christmas time, the Holly was usually hung on doors, windows to prevent the entry of witches and evil spirits.

In Scandinavia the plant is known as the Christ Thorn.

So, now that you've learned a lot more about these Christmas Plants than you ever really wanted to know, why don't you hop on over to Amazon for a little Mischief? You won't be disappointed. 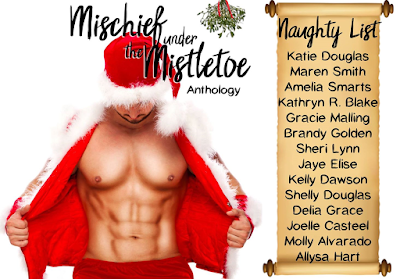 Email ThisBlogThis!Share to TwitterShare to FacebookShare to Pinterest
Labels: anthology, Christmas, Holly, Mischief under the Mistletoe, Mistletoe, on Sale, Poinsettia