Lissie Pettigrew isn't convinced the stranger who suddenly appeared on their land doesn't mean them harm, but she'll do everything she can to distract him from her younger sister. 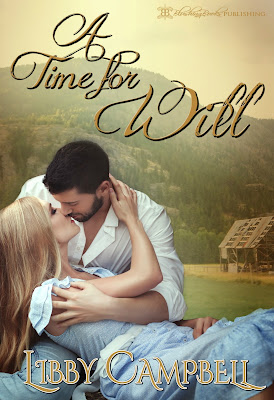 
The man was tall, over six feet, with broad shoulders and a slim waist. Clean-shaven with intense silver-grey eyes, he didn’t look happy to see them. This had to be another one of Verity’s practical jokes. His denim jeans, leather vest with deep pockets, and old-fashioned Stetson were straight from a costume store. His thin cotton shirt hugged him like a second skin, Liemphasizing his buff body. The only worrying detail was the gun and holster set.
Lissie pointed her chin at the revolver in his hand. “That’s not a very nice way to greet your hosts,” she said, trying to ignore the blood pounding in her ears. Verity had pulled some major pranks in her time but this was the first time she’d hired an actor to point a gun at her sisters. At least Verity had hired a hottie for this job.
“Who are you? Why are the two of you wearing men’s clothes?” The man frowned as he spoke, his slow drawl sounding out of place in the 21st century, even in this small country town.
“Who are you and what are you doing lighting fires on our land?” Lissie smiled sweetly, waiting for Verity to spring out of the bushes, yelling gotcha.
“I’m the one with the gun. Maybe you’d better start talking. My name is William Dawson. Mr. Dawson to you.”
“We’re innocent cowgirls, looking for our sister, Mr. Dawson, sir.” Even as she heaped on the sarcasm, it started to occur to Lissie this might not be a joke. His tone had been disapproving. Impatience still clouded his eyes. That made her bolder, if only to draw his attention away from Hope. “I’m Felicity and this is my sister, Hope. That’s Felicity and Hope to you.” Now might be a time not to give him too much information, she decided.
“I’ve been here a couple of hours now and you’re the first people I’ve seen.” He kept eyeing the truck nervously.
Lissie watched him. “What’s wrong with you? Never seen an F350 before?”
“No.” He looked at the girls one more time before slipping his gun back into its holster. “I don’t even know what an F350 is.”
“C’mon,” Lissie chided. “Have you been living under a rock? An F350 is a truck. They’re everywhere. This is mine.” She pointed to the blue one she’d just hopped out of. “And this one here belongs,” she pointed to Verity’s silver pick up, “to my sister. Verity came out here earlier today. She was going to organize the kitchen and bedrooms. Tomorrow the electricians are going to turn on the electricity to the house.”
“Electricity,” Will sounded out the word, as if it was Latin or Greek. “I’ve heard of that.”
Hope burst out laughing. “Okay, Verity,” she said to the bushes, “good joke. You can come out now.”
“I told you,” he said fiercely, “I’m the only one here.”
Lissie grinned. “I believe you, cowboy.” To keep his eyes off Hope, she moved closer, swinging her hips. In case he was some sort of psycho, she needed to do everything she could to save her little sister. She moved with far more confidence than she felt. As she approached him, she caught his grass, leather, and onions scent. It was a primal smell that spoke of hard work and honest labor. It was far more appealing than she wanted it to be.
If he was part of a practical joke, she’d make Verity pay. If he was something more dangerous than that, she wanted all his attention focused on her.  “What do you do when you’re not pranking innocent girls? Are you a movie extra or something?”
He narrowed his eyes at her as she sidled her body next to his.
She brushed some dust from his shoulder. “I’ve been asking Santa for someone like you my entire life. I guess the wait was worth it.” She ran her hand over the front of his leather vest. “This is nice and soft, just like your lips, I bet.” She made a kissy face at him.
He caught her wrist. “What sort of a girl are you, talking to a man like that?” His grey eyes glinted with outrage.
“I’m a modern sort of a girl,” she said. “I take what I like.” She reached with her other hand and stroked the dark hair that curled around his ears and under his hat. “Nice.”
Before she could register what he was doing, he grabbed her hands and pinned them behind her back. His long, muscular fingers held her two wrists together effortlessly.


Identical twins, Verity and Felicity (Lissie) Pettigrew inherit an abandoned farm in the remote hills of the Methow Valley. Little do the twins know, but their windfall harbors a secret. While exploring the old barn, Verity stumbles into a hidden portal and is instantly transported more than one hundred years into the past.

In 1885, on the same farm, Will Dawson is saddling his horse when a disturbance in a corner of the barn catches his attention. In his haste to rescue the gorgeous woman in the center of the disturbance, Will is flung far into the future.

Meanwhile, Lissie arrives on the farm looking for Verity, but finds the handsome, slightly suspicious cowboy instead. From their first words to one another, sparks fly.

Lissie’s modern manners and profane language offend Will. His solution? Some old-fashioned discipline delivered on the spot.

Affronted by Will’s distinctly un-twenty-first century approach to male/female relationships, Lissie challenges his authority at every turn in spite of nearly always ending up over his knee.

Meanwhile, Verity must deal with life in 1885. Although accepted into Will’s family, she longs to get back to the 21st century and the man she loves.

Can Will live in a future in which progress comes at the price of everything he holds dear? Can Lissie win him over, and teach him that women can be independent and willful but still soft and sexy? Will Verity find her way back to the man she loves?


Don’t miss these other great books from Libby Campbell and Blushing Books:

Libby Campbell writes in the bay window of her mock-Tudor home, fueled by coffee, chocolate, and many cups of fragrant tea. Sharing a love of hiking, road trips, and an occasional night of dancing, Libby and her husband live on a rocky island in the Pacific Northwest.

Libby savors her evening bubble baths where she sings along to her favorite music, safe in the knowledge that no one can hear her. She loves all animals, but particularly small dogs with big attitudes and big ones who think they are lap dogs. A woman for all seasons, Libby is happy cuddling in front of a winter fire, watching a summer sunset, listening to birds in the spring, and walking in the autumn rain.

Optimistic by nature, Libby wants a solid HEA in her reading and her writing. She writes the stories she wants to read. To see what she’s working on now, or how she formed her earlier novels, visit her Pinterest boards where she pins pictures that inspire her characters and their worlds.