However, today, I've decided to take a break from my WIP in order to share an excerpt from my first book in the Corbin's Bend series, A Simple Misunderstanding, where I tackle the problem of recognizing and addressing spousal abuse in a liberal spanking community. The community's residents right to privacy is paramount, and sometimes rough play can produce bruises that appear similar to abuse. So, as long as both partners deny any problems exist, the community can't take action. To do so would jeopardize the very foundation of what they've struggled so hard to build. 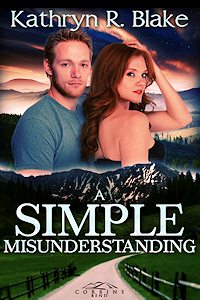 In this scene, which occurs in Chapter 3, Gerald Douglas (Jerry, who is the Corbin's Bend veterinarian) suspects Eleanor Benson (Elly) is being abused. So, he's asked her mentor, Kelli Stevens, to check on her. Both submissives and dominants are assigned mentors in Corbin's Bend to help them with any issues or questions they might have about the domestic discipline dynamic. Though Elly likes Kelli, she blames herself for any problems she and Arthur may be experiencing, so she's not been entirely honest with her mentor. Kelli suspects this and asks if Elly would prefer to have a younger mentor. Elly is surprised by the question, so Kelli points to the bruises on Elly's wrists. Bruises left by the handcuffs Arthur had put on her the night before. Elly promptly covers the marks, insisting they were caused by her struggling and that Arthur had never intended to hurt her. So, Kelli asks if Elly's bruises were an accident.

Nodding, Elly added, “I need to be more accepting of his discipline. He only wants what is best for me.”
“And does he take care of you afterward?”
Elly hesitated for a moment, then nodded again. Arthur often had sex with her after a discipline session, though he didn’t always remove the cuffs and her gag until he was through.
“Do you enjoy your DD relationship with your husband?”
Blinking, Elly wondered what part about domestic discipline she was supposed to enjoy. Did anyone actually enjoy getting spanked? Not in her opinion, they didn’t. She certainly didn’t enjoy Arthur’s punishments. Did she deserve his discipline? Most times, yes. Did she love him? She tried to, but his strict inflexibility angered her sometimes. He’d changed once they’d moved to Corbin’s Bend, but he’d said she’d become lazy and disorganized and needed a firmer hand now. Where was the enjoyment in that? “I think the discipline is what I need to be a better person,” she answered carefully.
“But you can’t say you enjoy it. I don’t mean the punishments, but the rest.”
What rest? What else was there? “I’m still learning, Kelli. It’s not easy.”
Kelli patted her arm. “No, it isn’t. But if you two love each other, you’ll work things out.”
Relieved, Elly nodded more vigorously this time. “I’m sure we will.”

Though a part of her knows she's not being entirely truthful with Kelli, Elly blames herself for her husband's firm discipline. She's convinced if she just tries a little harder things will be better between them.

In his years as a vet, Jerry Douglas has seen what abuse does to animals, and he recognizes those same signs in Elly Benson during her daily escape to the dog park with her tiny poodle. Jerry steadfastly supports the tenets of domestic discipline and enjoys the freedom Corbin's Bend offers its residents, but he remains fiercely protective of anyone in need of a champion. And when he witnesses evidence of harsh handling, his instinct is to rush in and rescue. Problem is Elly Benson is a married and consenting adult who insists all her bruises and welts are nothing more than a simple misunderstanding between her and her husband, until the day Arthur Benson takes his authority and discipline one-step too far, endangering Elly's life.


A Simple Misunderstanding is available at the following locations.

I also have a page on my web site where I am offering a sample of the first three chapters. If you're interested, visit either the Spanking Romance or A Simple Misunderstanding page in the Over 18 section of my website.

Hope you enjoyed the excerpt.  Thanks for visiting.  Now go visit the other authors and see what they're sharing by either clicking one of the links below, or visiting WIP it up Wednesday.