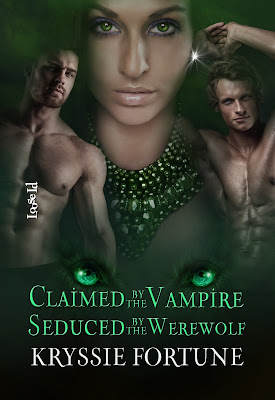 
Elias curled his hands into fists and tensed his muscles. Seth spread his arms wide, pinning her behind him as he tried to stare his half-brother down. Furious, she shoved past the pair of them and stormed into the trailer. “I’m getting dressed in the bedroom. Seth, put some clothes on. Once you’re dressed, brew us all a hot drink. Elias, get in here. Sit by the window and keep your fists to yourself. You’re both welcome to come home with me tonight, if you still want to, but the first one to attack their half-brother is no longer welcome.”
There. The choice is in their hands now. They might make my decision for me.
Tempest’s head turned just as Seth smirked at Elias. She put her hands on her hips and shook her head. “I mean it, Seth. Touch him, I’m leaving, and I won’t be back, ever.”
Head high, she gathered her clothes and marched into the bathroom. Her conscience screamed, Slut! When she thought about how her lovers had fought over her, she felt sick. Her head ached and her hands shook. What with that car coming directly at her and those archers trying to turn her into a hedgehog, her day couldn’t get any worse—meeting Seth excepted, of course.
A quick shower helped, and although she’d messed up, her heart craved both lovers on a permanent basis. Moments later, dressed in her work clothes, she walked back into the lounge. Two coffees stood on the kitchen worktop, one for her and one for Seth. She shook her head. “Seth, you’re the host. Please make Elias a drink.”
Elias clenched and unclenched his fists. “The only drink I need is another taste of your delicious blood.”
Seth growled, tensed to attack, but, mindful of Tempest’s threat, he froze. “He’s taunting me.”
She sat by the broken table and sipped her drink. “Be the bigger man and ignore him. Elias, behave and explain why your family abandoned you.”
The vampire sat motionless, his mismatched gaze fixed on the wall behind his bride. “I bared my soul to you, ángelós mou.” His lip curled. “I will not give a werewolf the satisfaction of knowing how my family’s rejection forced me to live.”
Seth’s growl sounded low and soft but full of menace.
She put her coffee on the kitchen work surface and sat beside Elias. When she rested her hand on his arm, Seth’s growl grew louder. Ignoring him, she smiled at Elias. “I know this is painful for you, gorgeous, but there are some things we need to clear up.”
Although Elias looked ready to storm off, he calmed when she took his hand. His grip almost crushed her fingers. Finally, he took a deep breath. “Since you have asked this of me, I will tell Seth how he and the others betrayed me.”
He kept his gaze on their interlaced fingers, clearly unwilling to let his half-brother see how deeply he still felt his family’s rejection. Haltingly, Elias repeated his history. “My father never summoned me home, despite the promises he made when he sent me, his firstborn son, to Sparta as a guest/hostage.”
Seth banged his mug on a side table. “Liar!
Coffee sloshed out of the cup, flowed over the table, and dripped onto the carpet. He exploded from his seat, his body shaking in anger. Elias stood slowly, his jaw set, his movements controlled. He raised his arm and used four fingers to beckon Seth toward him. “Bring it on, wolf boy.”
Seth curled his lip and sneered. “I’ve more respect for Tempest. Listen, Fang-face, my father wrote weekly. He gave his letters to my mother, his favorite concubine, with orders to see them dispatched to Sparta.”
Elias stared at his half-brother, his eyes glowing red. “I’m not the one lying. Tell the truth before I make you.”

Vampire and werewolf loathe each other. The only thing they agree on is that Tempest is their mate--and they’re not sharing.

A prophecy will force Tempest, a twenty-first-century witch, to choose between them. As the half-brothers vie to win her heart, they teach her about spanking, the way pain heightens pleasure, and the joy of multiple orgasms.

A vampire can’t survive without his fated bride. A werewolf dies if he loses his mate. Their future rests in Tempest’s hands. Which one will she choose?

●      Note:While loosely linked to the Scattered Siblings series, this book may be read as a standalone story


Kryssie likes her contemporary heroes ex-military and dominant. Her heroines are kick ass females who can hold their own against whatever life - or Kryssie - throws at them.

Kryssie's pet hates are unhappy endings, and a series that end on a cliff hanger.
Her books are all stand alone even when part of series. Plot always comes before sex, but when her heroines and heroes get together, the sex is explosive and explicit. One review called it downright sensual.