She needed a job, he needed a personal assistant. What could go wrong?

My submission for this week's Book Hooks is from my 8th novel, Lessons in Love.

Pam Weston didn't have many choices as far as employment went. Her prison sentence saw to that. With limited secretarial skills, and an even more limited budget, she never considered herself executive material. So, when she was ordered to report to the CEO of her company as his new personal assistant, she fully expected to be checking out the "Help Wanted" section of the paper before the day was over.

Robert Peterson knew his management style was not HR approved, but he believed in using the stick as well as the carrot. Employing the tenets of domestic discipline, he helped mold his personal assistants into confident women who recognized their own self-worth. Even so, his unorthodox methods were only one of the reasons many considered the position of his assistant to be a revolving door. To Rob's mind, Pamela Weston was perfect for his purposes, though given her past he expected convincing her to agree to his program would be a challenge. 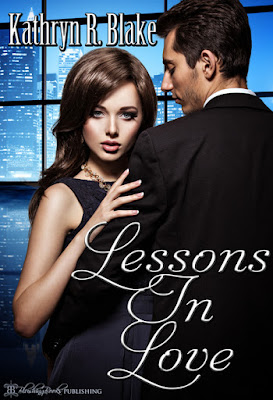 In this scene, which occurs in chapter eight, Robert Peterson is treating his new executive assistant, Pam Weston, to dinner at his exclusive club where he escorts her to a private dining room so she can ask her questions. However, when Pam refuses to sit down, Rob stands. The moment he does, Pam sits and picks up her menu saying she's not sure what she's going order. Rob steps over and asks her to take his hand. When she finally obeys, he holds her close and assures her she's safe. Then taking her over to the couch, he pulls her down on his lap and continues with his agenda by asking Pam how many rules she thought she'd broken that day. Their discussion is interrupted with a knock at the door.

A young liveried waiter entered, so Pam promptly attempted to rise, but Robert's arm across her thighs prevented her from moving. "No. I want you to stay exactly where you are."
"But—"
He put a finger to her lips. "All I want from you is silence. No protests, no complaints, no excuses. Just rest against me and be quiet, and you may consider that an order."
With a sigh, Pam did as he commanded, while he ordered dinner for them. Because she complained of a finicky stomach, she was getting broiled chicken and rice and he requested sole Florentine for himself, along with a crisp Chablis to go with their meal. The only thing he asked her was what type of dressing she preferred on her salad."
"Ranch?" she asked, uncertain if it was on the list, since she'd been too preoccupied with the man who held her so effortlessly she felt more powerless than a little girl, to register the waiter's selections.
"Very good, sir," the waiter, promptly replied. "It should be about twenty minutes, if that meets your needs."
"That will be fine, Walter. Thank you."
Walter bowed and walked out.
"Now, where were we? Ah, yes, the number of times you chose to disobey me today."
"I didn't choose to do it."
"I disagree. Each time you disobeyed me, you made a conscious decision to do so. I consider that willful disobedience, which I view as much more serious."
Pam crossed her arms over her chest and glared at him. She would not participate willingly, and she would give him a fight if he attempted to discipline her here. His eyebrow rose in challenge, but he was prevented from saying more when his phone rang.

Rob knows Pam is nervous, and took her to his club so she could ask him questions with far more privacy than a restaurant would offer. Unfortunately, the ambiance of his club is making her very uncomfortable as is the man himself.

M/F, DD on the executive floor.

If you're 18 or older, you can read the first three chapters at Lessons in Love