For Sunday's Six of the Best, we share six paragraphs from a published work or a WIP (work in progress).

My submission for this week is from my 5th book, Acting Lessons, loosely based on the story of Kiss Me Kate. 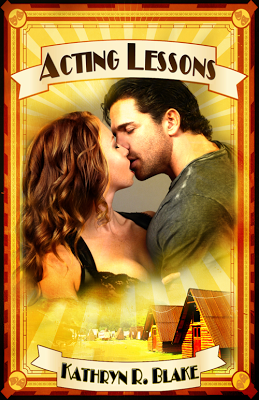 In this scene, which occurs early in the first chapter, Peter Thorton, seated comfortably in an agent's office, is attempting to convince his wife, Kate, to give their marriage a second chance by signing her to appear with him in a College Summer Stock production of "Kiss Me Kate."  Kate isn't sure she can trust Peter with her heart again, since she believes he's been unfaithful to her, but she's never stopped loving him.  And though Domestic Discipline originally played a part in their marriage, their last two years together had them living like polite strangers sharing the same house.

Peter realizes he made a mistake in letting Kate do as she pleased, so he's determined to rectify matters immediately by informing his famous wife that if she keeps acting like a brat, he will turn her over his knee. Furious, Kate makes the mistake of challenging her husband, so he proves to her his threats are no longer idle.

The spanking provides an emotional release for Kate, and she ends up crying in Peter's arms. Once she gets herself under control, Kate attempts to apologize, but Peter cuts her off with a kiss then informs her he wants them to have dinner together. Feeling cornered. Kate informs him she has a previous engagement she is not willing to cancel, but Peter presses until finally Kate grows petulant. When she complains that he can't just turn her over his knee whenever she disagrees with him, he warns her he won't hesitate to do whatever is necessary to improve her attitude if she continues to be snippy with him. Realizing this was an argument she couldn't win, Kate backs down. Though Peter is willing to meet her halfway, he still insists things are going to change between them, and when Kate asks him how, he answers:

"By taking care of you, Katherine, since you have difficulty doing it yourself."
Kate considered his words.  Working with Peter had its downside.  He liked to manage down to the smallest detail, so no matter how much she insisted on autonomy, he would override her objections when it came to her health and safety.  Fighting Peter was like yelling at the sea during a raging tempest.  She could rail and protest all she wanted, but he would pound away at every one of her mountainous objections until they were minute grains of sand.  Sometimes through logic, most often through other means.
If she agreed to do this, Kate would be subject to his authority whether she liked it or not.
"I refuse to be bullied," she whispered under her breath.
"Do you consider what I do bullying?"  His voice almost as soft as hers.
"Occasionally."

Kate pushed, so Peter pulled.  Temporarily reconciled, Kate has to decide whether to give into his wishes or stand firm so he doesn't think she's lost her backbone. In a case of push and pull, something has to give.

Thanks for visiting.  I hope you enjoyed this brief excerpt and want more. Please click the link below to continue your hop Sunday's Six of the Best. Wishing you a wonderful journey.