Bondage & Discipline, Domination & submission, Sadism & Masochism
BDSM encompasses so many things. It’s understandable why someone who has never participated in it might be confused about what it truthfully entails. We’d like to set that straight. For every person involved in what we call the Lifestyle, there’s a different way of doing things. However, no matter where you go, you’ll encounter a few basic tenets and the folks who are participating in our blog hop would like to show you how some of these things really work. So, please join us!
The hop will last a full week and some of our participants will be posting more than once throughout the week, so make sure you check back for more (or, better yet, sign up to follow the lovely folks participating, they’ve got great stuff!).
If you would like to participate, we’d love to have you! 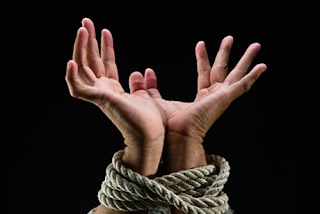 Feeling Safe When You Don't Want to be In Control
BDSM can be a world of contradictions. A submissive by nature wants to hand over all control to her Dominant (I'm using female submissive vs. male Dominant for expediency, not because I feel this is the only true combination in BDSM. It's not.) A submissive wants to trust her Dominant to know exactly how far to take her so she goes just beyond her comfort zone. She wants to give herself over to him so he has all the responsibility for their scene. He determines, what, when and how she is to accept without question.
I write romance, and often in my stories the hero is nearly psychic in understanding his submissive's needs. Unfortunately, in real life very few people are psychic. So, to play responsibly, both parties need to negotiate and set their limits. One of the ways they can do this is to establish a series of safewords or signals that allow the submissive to communicate her current state of being to the Dominant. But even safewords aren't infallible, and some submissives don't like using them, primarily because they make her feel as if she's the responsible party, and that's not what she wants or needs. A Dominant can call a safeword, too, especially when he suspects the submissive isn't in the right mindset for the scene, or he feels they've gone as far as he is comfortable taking her.

Knowing Your Limits
Trust is the key. Both the submissive and her Dominant need to be able to trust each other to stop their play from going too far. This can be a problem because by nature a submissive desires to please her Dominant, so she feels calling a halt to their play is a failure for her. She sees herself as being weak if she safewords, so she will push herself past her “comfort” zone to please her partner.
This may allow a submissive partner to expand her boundaries and learn what she is capable of withstanding, but it may also expose her to severe risk if those limits are pushed too far. Additionally, many dominant partners may interpret the use of a safeword as a failure on their own part, (i.e., failing to understand body language, to know their partner, or loss of control.) Neither the submissive nor the Dominant should be considered wrong or at fault for using a safeword. 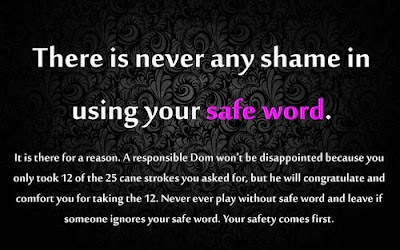 I believe safewords should be considered “no-fault” so that participants don't feel guilty using them. Discouraging the use of safewords runs the risk of scenes becoming non-consensual, harming trust between partners and potentially damaging to the individual's mental and emotional state.
A Dominant or Top will often make it clear beforehand that he will not agree to a scene if he fears the submissive will not safeword as soon as she needs to. This reluctance puts the submissive in the position of enduring more than she wants to, or should, simply to avoid disappointing her Top. Submissives need to keep in mind that a good Dominant will be far more upset if he unknowingly inflicts psychological trauma on his submissive than he will if she calls a stop to their play. Tops are human, too, and are just as susceptible to "top-drop" as submissives are to "sub-drop."
Each of us has limits or boundaries that deserve to be respected. No one else can tell you how much pain or humiliation you are comfortable receiving or dispensing. Individuals need to decide for themselves where their line is drawn, be they Dominant or submissive. Knowing and respecting your limits is essential for a successful scene. Using a virtual safety net in play doesn't mean the submissive is "topping from the bottom," it means the play is no longer meeting her needs. BDSM is meant to allow participants to find pleasure through kink. Finding only misery is self-defeating, even if you're a masochist. 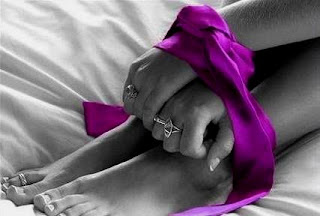 Safe, Sane and Consensual vs. Risk-Aware Consensual Kink
The key word here is consensual, which leads us to the concept of consensual non-consent. Safewords of BDSM fall under the guiding philosophy of safe, sane and consensual. Those who practice the more permissive philosophy of risk-aware consensual kink may abandon the use of safewords, especially those partners who practice forms of edgeplay or extreme forms of dominance and submission. In such cases, the choice to give up the use of safewords is a consensual act on the part of the bottom or submissive. Because of the inherent risks involved, abandoning safewords should only be practiced by partners who know each other's limits intimately. If the play partner is new to you, please be responsible enough to establish your limits beforehand through the use of safewords or hand signals.
As was mentioned before, a safeword is usually used by the submissive, but can be used by all participants in a scene, including Dominants, dungeon masters at play parties, and sometimes even observers. For example, a submissive may misbehave intentionally to indicate her desire for harsher treatment, and sometimes a Dominant will need to safeword to let his submissive know the scene has gone too far for him to feel comfortable continuing. Or, a third party observing a scene may have the ability to spot something dangerous going on that both the Top and bottom have missed, and need to stop the scene to point it out. Either way, the primary concern is safety, especially for the partner on the receiving end, but not even safewords are infallible. 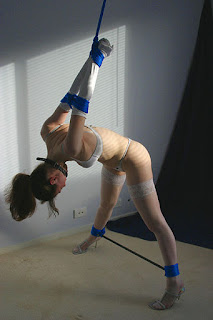 When Safewords Fail
Here are some reasons why safewords fail:
The bottom can't form words. Many bottoms are rendered non-verbal by S&M experiences, even mild bondage or light spanking. This is part of the appeal of being a bottom; your mind shifts out of its normal patterns. And most bottoms are non-verbal in physiological subspace, which is an altered state.
The bottom can't remember the safeword. If she's never had to use it in distress, it probably won't come naturally to her.
The bottom doesn't want to disappoint her Top. If the bottom is submissive towards her top in a more general way, she may be more focused on "being good" than her own safety, even if the latter is his highest priority. Calling out the special word that short-circuits her lover's authority may be anathema to her.
The bottom doesn't realize she's in trouble. Her judgment is clouded, and her sensations are all different. She might realize that something's not right, but think it's really not all that bad.
The Top doesn't recognize the safeword. If he hasn't heard the bottom yell or whisper or groan the word before, it might not register with him when uttered that way during a scene. He might even mistake it for an expression of ecstasy!
The Top is in a groove at that moment. Maybe she's screaming in just the way he wants to hear. Maybe what he's doing feels really good to him. Maybe he's in topspace.  He needs to hear something that will jar him out of his groove.
So what to do? The safest way to play is for Top and bottom to agree that any request to help or halt is the signal to stop:
No. Wait. Help. Stop. Enough. Hold on. Uncle. Let me go. I can't take this.
Even an unusual or unexpected response to pain can be a signal, (e.g. crying out "Ow!" after a period of moaning.)
Note: a designated safeword is essential if you play verbal games during a scene, where the bottom gets to say, "No! Stop!" and the Top is supposed to keep right on going. This deepens the sense of taboo, without crossing the line. As I mentioned above, such games should be played only with partners you're very familiar with. Even then, the participants should select an obvious word like "safeword" or simply "safe", and find ways to practice it together before playing the scene for real.
Though it is the Top's responsibility to be aware of his partner's state, regardless of what she says or doesn't say, the submissive has a responsibility as well to assure the top she's okay when he checks in with her. 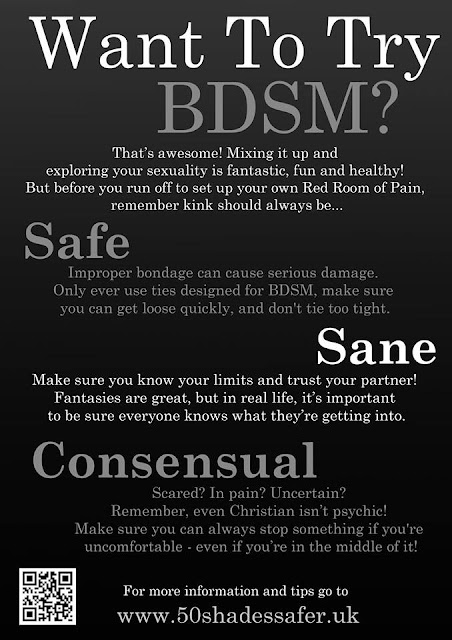 I would like to thank the following sites for being instrumental in helping me put together this article.

a Rafflecopter giveaway
Posted by Kathryn R. Blake at 12:30 AM