I have always been fascinated by Vikings. Strong, sexy warriors, ruthless, dominant and determined – what’s not to like? It was only a matter of time before I wove a story around these fierce raiders who rampaged through Scotland and England for over three centuries, eventually settling and leaving their indelible mark on our history.

A Viking raid was indeed a ferocious affair. They relied on what would nowadays probably be termed ‘shock and awe’ swooping in from the sea on their fast dragon ships to attack with vicious and deadly effect. The Nordic raiders would be gone almost as swiftly as they arrived, leaving a trail of destruction in their wake. The modern equivalent would be a helicopter attack on a sleepy rural village by SWAT teams armed with automatic weapons– the local people would hardly know what hit them.

I have employed a certain amount of poetic license, but I was determined to recreate the Viking era to the best of my ability – their homes, their clothing, what they ate, how they lived. I hope readers will be as entranced as I am by these creative and charismatic raiders, and perhaps forgive them their more outrageous little foibles. 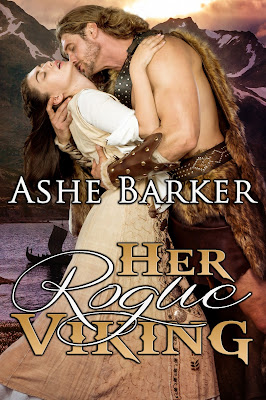 
Ulfric resumed his sensual journey between her clenching buttocks, pausing when he reached the tight rosette of her rear hole. He circled that with one fingertip as she gasped and buried her face in the front of his woollen tunic.
“Am I hurting you?”
She shook her head quickly, though he had no illusions regarding her opinion of such intimacies. He resumed his lazy play, pressing gently on that pursed ring of muscle until she pleaded with him to stop.
“Sir? Ulfric? I have never… please, not there.”
“No, of course not there, not this time. But soon…”
He moved on, now slipping his fingers lower to explore between her soft folds. Her soft and very moist folds.
Yes! He had known it. The Celtic wench might well be embarrassed and apprehensive, her mind recoiling in aghast horror at his bold and intrusive touch but her body was eager enough. She even parted her thighs for him, perhaps not realising what she was doing.
Still reaching around her, Ulfric spread her lower lips from behind and slid his fingers along the length of her slit. He stroked gently, back and forth, smearing the copious moisture on his fingers, then bringing it back to her puckered anus. This time when he pressed, the tip of his finger entered her. She squeaked, and he withdrew. It was enough.
He reached around and beneath her with his other hand, this time seeking her most sensitive little bud. He found it, already swelling and deliciously plump, and started to draw his fingers back and forth across the very tip. His touch was slow, lazy almost, but he knew exactly where to concentrate the sensation for the most devastating effect. This was her first time, he was sure of it. He would make sure she did not forget what he could do to her if he chose. If she earned it.
Fiona groaned, writhing against his hand. He did not believe she was even aware of her actions as he built the pressure, his unerring caress drawing out a response he was quite certain she had no idea might be lurking.
“Ulfric, what is happening? What are you doing?”
“Am I hurting you?”
“I do not know,” she answered, her tone one of pure dejection. “It feels… strange.”
“Is it unpleasant?”
“No,” she conceded miserably.
“And do you wish me to stop?” He had no intention of doing so, but was interested in her answer even so.
She did not offer a response at once, but wriggled her hips as she sought to angle her clit for better access, more friction. Ulfric rolled the sensitive nubbin between his finger and thumb before he repeated his question.
“Fiona, do you wish me to stop?” He squeezed softly.
“Oh, sweet Lord…”
“Fiona?” Another squeeze, firmer now.
“No. No, do not stop…” The words were wrung from her, a desperate, anguished moan as her first climax coiled and unfurled deep within her. She grasped his tunic with her still-bound hands and hung on to him as though afraid he might even now slip away.
“Do not fight me, little one.”
“I… I am not. I want… I need…”
“Let it go.” He rubbed her clit harder now, and using his spare hand slipped the tip of his finger back into her rear hole.
“Oh! Oh, I cannot… Ulfric, please…”
“Let it happen,” he repeated. “Let me have your release. Now.”
He was rewarded by her long, drawn-out moan of ecstasy as her body contracted and convulsed. He was tempted to sink his finger deeper into her arse, but resisted. He wanted her to be aware of every inch he would drive inside her tight channel when he finally took her, so for now he concentrated on drawing out her quivering response with his deft fingers playing her engorged clit.
At last she was still, silent again, and lying limp in his arms. He withdrew his finger from her arse and released her clit, then bent his head to kiss the top of her head.
“Any more bruises, little Celt?” 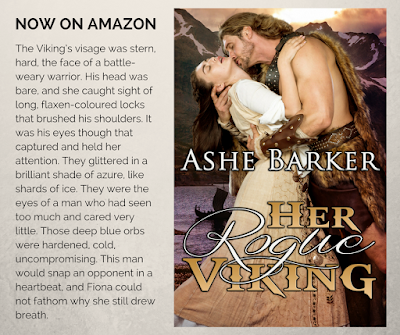 
Though Fiona puts up a brave fight when her village is raided by Vikings, she ends up being carried off over the broad shoulders of Ulfric Freysson, the leader of the Norsemen. The stern, ruggedly handsome warrior quickly makes it clear that she belongs to him now, and her best efforts to escape merely earn Fiona a painful, humiliating switching on her bare bottom.

Her captor’s bold dominance sets Fiona’s passion ablaze, and when he brings her to his bed she cannot help begging for him to claim her completely. As Ulfric begins training her to please him in any way he demands, Fiona finds herself falling in love with her new master, but she soon realizes that there are those among his people who still see her as an enemy. When her life is threatened by a member of his own family, will he stand ready to protect her no matter the cost?

Publisher’s Note: Her Rogue Viking includes spankings and sexual scenes. If such material offends you, please don’t buy this book.


USA Today best-selling author Ashe Barker has been an avid reader of fiction for many years, erotic and other genres. She still loves reading, the hotter the better. But now she has a good excuse for her guilty pleasure – research.
Ashe tends to draw on her own experience to lend colour, detail and realism to her plots and characters. An incident here, a chance remark there, a bizarre event or quirky character, any of these can spark a story idea.
Ashe lives in the North of England, on the edge of the Brontë moors and enjoys the occasional flirtation with pole dancing and drinking Earl Grey tea. When not writing – which is not very often these days - her time is divided between her role as taxi driver for her teenage daughter, and caring for a menagerie of dogs, tortoises.  And a very grumpy cockatiel.
At the last count Ashe had over forty titles on general release with publishers on both sides of the Atlantic, and several more in the pipeline. She writes M/f, M/M, and occasionally rings the changes with a little M/M/f. Ashe’s books invariably feature BDSM. She writes explicit stories, always hot, but offering far more than just sizzling sex. Ashe likes to read about complex characters, and to lose herself in compelling plots, so that’s what she writes too.
Ashe has a pile of story ideas still to work through, and keeps thinking of new ones at the most unlikely moments, so you can expect to see a lot more from her.
Ashe loves to hear from readers. Here are her social media links:
Newsletter sign-up
www.ashebarker.com
Facebook
Twitter
Instagram
Pinterest
Goodreads
Or you can email her direct on ashe.barker1@gmail.com