My submission for this week is from my contracted spanking romance titled, Acting Lessons.  I put WIP in the header, since the work isn't published, and I don't have a release date for it, yet, but it's under contract to be published before the end of the year. 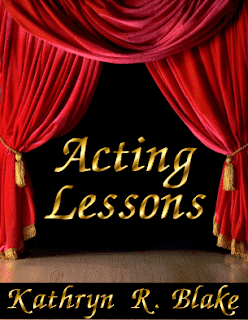 Setup: early in the first chapter, Peter Thorton is attempting to convince his wife, Kate, to give their marriage a second chance by signing her to appear with him in a College Summer Stock production of "Kiss Me Kate."  Kate isn't sure she can trust Peter with her heart again, since she believes he's been unfaithful to her, but she's never stopped loving him.  And though Domestic Discipline originally played a part in their marriage, their last two years together had them living like polite strangers sharing the same house.  Peter realizes he made a mistake in letting Kate do as she pleased, so he's determined to rectify matters immediately.  In fact, he's just reminded her what he will do if she continues to act the shrew off stage.  Unrepentant and angry, she threatens to sick the cops on him if he even attempts to spank her.

"I sincerely doubt you'll call the police, but whether you will or won't makes little difference, since your threats can't stop me from doing what I believe needs to be done."

"Go to hell."
Though Kate spoke the words softly, Peter's eyebrows snapped together as if she'd shouted them.  With a subtle shift in his position, he leaned forward and scowled.  A reminder.  Peter had a rule against swearing.
Kate's mouth grew dry with uncertainty as an apology hovered on the tip of her tongue.  Then, with a silent curse at herself for playing into his hand, she surged to her feet and glared at her agent.  "I won't--"
She didn't get one word further before Peter grabbed her arm and pulled her face down over his knees.

It's lesson time, boys and girls.  Rule one: do not challenge the man who wields his hand like a paddle, unless you wish to feel its bite.

I'll continue to post excerpts from Acting Lessons, so when I get a publication date you guys will be one of the first to know.


Thanks for visiting.  I hope you enjoyed this brief excerpt and want more. Please click on one of the author's names below, or visit The Saturday Spankings Blog to continue your journey.
Posted by Kathryn R. Blake at 12:00 AM