Arianne’s just regular girl pushed into a corner and desperately looking for a way out. 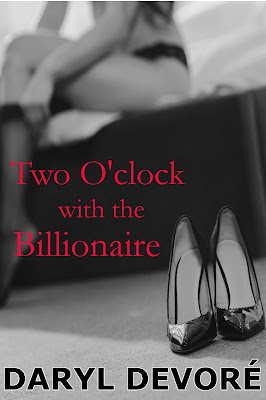 “You don’t have to do anything. I want to explore you.” He ran his tongue up the underside of her breast and flicked it across her nipple. “This is about satisfying my curiosities or needs of the moment. And at this moment, my curiosity centers on the feel of that nipple.” He sucked it into his mouth.

Arianne arched her chest. Her eyes closed as she focused on the sensation of his lips caressing her bud.

Reaching over he fondled her other breast, stroking the soft flesh and teasing the hard nipple between his fingers. Releasing her, he said, “I want to learn what works for you. How you respond to my touch. Lay back. Close your eyes. Indulge my curiosity.”

As his mouth moved to her unkissed nipple, his hand slid down her stomach. His fingers slithered through her bush and stroked the insides of her thighs. He tapped her inner leg and she splayed them apart. Casual strokes from her mound to her pussy ignited a fire deep inside her belly.

Arianne followed what he did with focused interest. He’s not hurrying. This isn’t a slam-bam. He’s doing exactly what he said… oh, that feels so— A soft moan escaped her lips.

A long finger slipped inside, turned upwards and began to rub the place where a woman’s g-spot is located. Thoughts gave way to soft sighs and deep moans as his thumb circled her clit.

“You’re so hot. And wet. Nice. Spread your legs more.”

She felt his hot breath a moment before his tongue touched her. Little laps across her clit made her hips squirm. Pulling her knees up and back, she exposed herself more fully to his mouth. While his hand continued to work her, his tongue explored every fold of skin and every secret place. 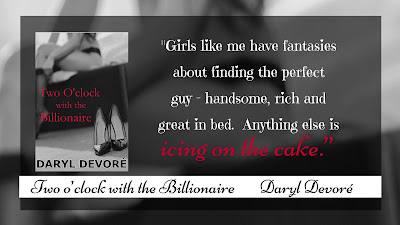 Two O’clock with the Billionaire is one of Daryl Devoré’s hot romances. A contemporary romance sweetened with a bit of vanilla sexcapades.

Where Derek Davenport is concerned, women only had one thing in mind: trap him into a marriage. The perfect way out? Hire a courtesan. While partying with his buddies he places an online ad that reads – Woman Wanted.

Unemployed and nearing financial desperation, Arianne is forced to step out of her comfort zone and answers an ad that reads Woman Wanted. With minimal hours and excellent pay, she accepts the position of courtesan to a handsome billionaire.

Their sexual antics cause emotions neither is willing to admit it. Will Arianne and Derek drive each other crazy…or will they fall in love first?
Buy Links:

Daryl (@daryldevore) lives in an old farmhouse in Ontario, Canada, with her husband, a large salt water aquarium full of fish, a black cat named Licorice and some house ghosts. Her daughter is grown and has flown the nest. Daryl loves to take long walks on her quiet country road or snowshoe across the back acres, and in the summer, kayak along the St. Lawrence River. She has touched a moon rock, a mammoth, and a meteorite. She’s been deep in the ocean in a submarine, flown high over Niagara Falls in a helicopter, and used the ladies room in a royal palace. Life’s an adventure and Daryl’s having fun living it.