Held captive as the personal hostage of a pirate captain, 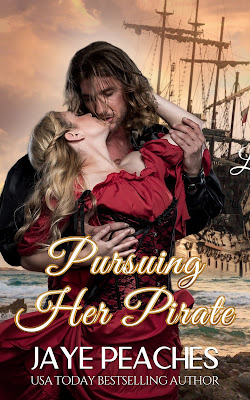 Esme stumbled through the door into the cabin. Behind her, the key rattled in the lock.

“Now, Esme, since you’re intent on making trouble with my new hands, you’ll have to pay the penalty.”

“I’ve done nothing wrong.” She folded her arms across her chest.

“You have not kept yourself silent on deck.” He towered a whole head above her.

“I do not.” She stomped her foot. “I’m just as capable as any other pirate. I led those dozen men here to you, did I not? They followed me because they thought I was a robber and were happy to carry out my orders to board the ship. What makes you think I can’t command your hands if needed?”

Creases of laughter formed around his eyes. All she wanted to do was join his crew, and he belittled her. Before she could stop herself, she pooled a mouthful of spittle onto her tongue. Her feeble attempt at spitting failed dismally. It dribbled onto the floor between them. Flynn’s grinning face transformed into a frown of disgust.

“Do you remember what I said about punishing you?” he said quietly.

She lowered her arms to her sides. Her knees nearly gave out. “Not a flogging, please, sir…” Tears pricked her eyes. Perhaps in her eagerness to be one of the hands, she’d gone too far with her jockeying.

Flynn tipped up face with the end of his finger. “I might have said rapscallion. But I certainly didn’t imply that you should be one in my cabin, especially as I intend to let you sleep here for your own safety. Perhaps I should tie you to the mast and let the hands decide how to punish you?”

“No, please, I will behave. I’ll not say a word out there. I’ll peel potatoes and stir pots. Just don’t throw me overboard—”

He laughed. “Overboard? Lass, many believe we pirates are the worst scum to take to the seas, but throwing pretty things overboard would be a tragedy. However, teaching you a valuable lesson is not. We’ll resume where we left off, shall we?”

“You spat at me, and I believe that deserves a spanking.” 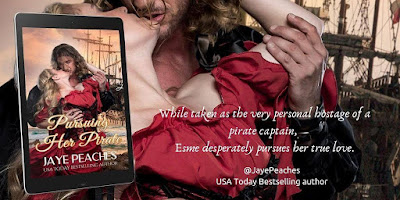 Esme has her heart set on one man. Unfortunately, he’s a pirate. Her only hope in catching his attention is to do something drastic and risk her life. Relying on the loathsome act of pressganging, she uses her disguise to gain access to his ship. However, Captain Flynn Bartoc has other plans for Esme, and she’s not going to win anyone’s heart if she’s tied up in his cabin.