Daryl Devore has dropped by to share an excerpt from Book One of her "Two Hearts, One Love" series "What Happens in Bangkok" But before we start, I asked her a couple of questions and I'd like to share her answers here:

Tell me a bit about yourself and what inspired you to become a writer?

I live on the Ontario side of the Ontario/Quebec border. When I'm not writing, I'm a yoga class. As to what inspired me - I learned to print and was able then to put my stories on paper.

What is your greatest temptation:

In men: Matt Damon – hands down – no question.
In food: chocolate – no wait- cookies – oooh chocolate cookies
In clothes: jeans – I'm a pretty casual person although I love checking out $900 Prada heels.


Erika dipped a chip into the salsa and popped it into her mouth. "I can't decide. Mexi-taco or Cali-taco."
"Huh?"
"Number twenty and twenty one."
"Simple." He placed his menu on the table and picked up a chip. "Get one of each, but make sure there's room for dessert. 'Cause I want a Churro. Or maybe the Sweet Chimichanga."
"Or both." She popped a salsa-covered chip into her mouth.
"Awesome." Darien dipped a chip and bit into it, trying not to look like he couldn't tear his gaze from her. The elegance of her moves as her fingers unfolded and reached for a chip. The curve of her wrist as she scooped some salsa. The jolt in his body when she opened her mouth and licked her lips. Watching the chip disappear past her teeth was too much for his control. His cock sprang to life. He'd never be able to look at chips and salsa the same way again.
The waitress placed the tray of monkey wings on the table. Erika squealed as they both reached for one. The happiness spread from her face to her body. Her nipples were visible, pressing against her dress. The pressure in his slacks increased. Her lips parted. He stifled a groan. She slid the piece of meat into her mouth and lightly bit into it. Her teeth grazed against the chicken meat, pulling it from the bone. A dribble of sauce escaped. She flicked her tongue across her bottom lip, closed her eyes and heaved a delighted sigh. Sweat ran down Darien's back. Yes, the wings were spicy. But the vision across from him was twenty jalapenos hotter. She picked up another wing. Darien trembled, grabbed his drink and chugged half of it. It did nothing to cool his soaring temperature, or reduce the swelling in his pants.
The visual of her lips wrapped around the chicken wing morphed into her lips around his fully aroused cock. As she pulled the next wing from her mouth, he swallowed–hard. He wiped his brow. "This is hot."
"Not too hot for you?" She placed her index finger in her mouth and slid it out, licking off the sauce.
"Not really, but I just might have to take a cold shower." He grabbed another wing. She reached for one. Darien shuddered. He never knew eating Mexican could be so erotic. 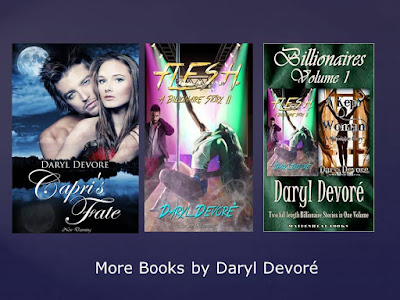 
Erika Bailey, owner/manager of a drag queen club in Bangkok, Thailand has happily settled into all aspects of her new life, except for her lack of a love life. When a new diva auditions, Erika is bewildered over her instant attraction to the blond God, Apollo.

Darien Scott is on vacation after a world tour and mistakenly figures the safest place to be is at The Black Dragon with the head of a Triad. When the club is hit, Darien is the only person to get out alive. Now he's running from the police and a Triad. Mistake number 1.

Disguised as a drag queen, he's hired by Erika, but falls hard for his new boss, then struggles with not coming clean with her. Mistake number 2.

Can he fix his mistakes and find a life filled with love or is he headed straight for mistake number 3?


What Happens in Bangkok is book 1 of the Two Hearts One Love Trilogy – book 2 was released on June 23.

5 Star Review –
I loved this story. From the very beginning I was on the edge of my seat until I finished it several hours later. I couldn't put the book down. I needed to know what was going to happen to Darien and Erika next. Fast paced from the first word and with several surprises I'd highly recommend this book.
5 Stars
This book got me hooked from the opening line with Darien puzzling as to why blood was seeping from his wolf tattoo. The chemistry between Darien and Erika sizzles from the first time they meet, even though she’s no idea who he is, nor the fact that he’s actually straight.

What I loved about this book was that it isn’t just about Darien and Erika. A whole cast of characters are vividly brought to life and though I didn’t like them all, particularly Gan I seriously wanted to gag whenever he appeared, they added another dimension to the story.

The action is fast paced, there are enough twists and turns in the plot to keep you guessing and the romance was hot. A great read, especially if you love stories in exotic locations.


What happens in Bangkok is the first book i have read from this author and I highly recommend it. I couldn't put it down was captured from the first to the last page. This book will keep you on the edge of your seat with all the twist and turns it gives you. Will so be looking for more from this author
** I voluntarily reviewed a copy of this book **