When childhood is denied you, sometimes you need to learn how to be little

My submission for this week is an excerpt from my upcoming release scheduled for November 27. Similar to Kelly's experience, Learning to be Little is my first attempt at depicting the dynamics of age play, and because it occurs in Kelly's past with her first, but not last, Dom, it is also a little different from other age play stories available today. However, I hope readers who enjoy age play and D/s will find their journey into Kelly's past an entertaining, sometimes funny, sometimes poignant, adventure. 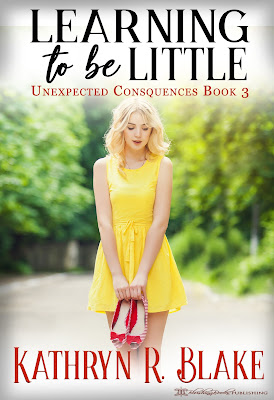 As an only child born to two only children, a young and precocious Kelly Franklin seeks out her Daddy whenever something frightens her. Unfortunately, her Daddy isn't available to soothe her and two strange men were hurting her mother. Scared, Kelly remains as quiet as a mouse in her parent's closet until the police pull her out. Twelve years later, Kelly falls on hard times and is taken in by Graham White as his adult little girl. Graham is a strict daddy, but he's also extremely generous with his affections unless Kelly is having one of her naughty days. And, unfortunately, it looks like this day Kelly is going to be very naughty.

On their first Wednesday outing together, Daddy laid out his rules. She wasn't supposed to talk to strangers, even if they spoke to her, unless he gave his permission and introduced her. If he did, she was expected to be polite but reserved, answer any questions with proper respect, but not pose any queries of her own. She was also to keep her eyes lowered except when she was answering a direct question.
Unfortunately, Kelly was naturally curious and outspoken. Two traits which didn't bode well for her on the Wednesday after they'd agreed to continue their relationship for a minimum of two more years. That's when they were approached by another daddy, whose adult little girl appeared to be a few years older than Kelly.
"Graham. I haven't seen you for ages. How are you?"
"Good, Trent. And you?"
"Excellent. This is my new young miss, Susie." He gave the pouting young woman beside him a nudge. "Say hello and make your curtsey to Mr. White, Susie."
Beneath her winter coat, Susie was dressed in a light blue woolen shift with a frilly apron front reminiscent of Alice in Wonderland. Too cute for words, she dipped into a quick, girlish curtsey and said, "Hello, Mr. White."
"Good afternoon, Susie. That is a very pretty dress you're wearing."
Kelly narrowed her eyes as the other girl giggled, gave another curtsey, and replied, "Thank you, sir." Too cute for words all right, and loaded with enough sugar to cause diabetes. 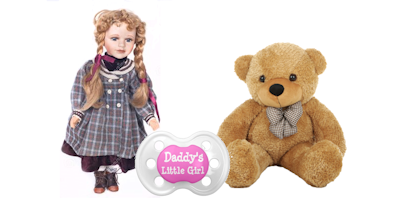 Kelly enjoys going out with her new daddy, but she doesn't care for other little misses flirting with him. Unfortunately, rudeness is never acceptable as Kelly knows and will be most firmly reminded again if she doesn't change her attitude quickly.

Kelly is one of my favorite characters. She can be such a brat at times, which is something her champion Graham White refuses to tolerate. The majority of this story is the earliest, chronologically, since it occurs in Kelly's past, but it is the most recent book in the series. Confused much?

So, if you want to know more about this bratty, sometimes submissive adult little girl, she first appears in Arrested by Love as a secondary character, but like all good primary characters she insisted on having her own story with her new Dom, which developed into A Dom's Dilemma. Both books, originally released in 2010, are being numbered, reedited and reissued with new covers in late November, along with Learning to be Little: Kelly's Story. Its cover is pictured above.