Rekindling the flames of love has never burned so hot. 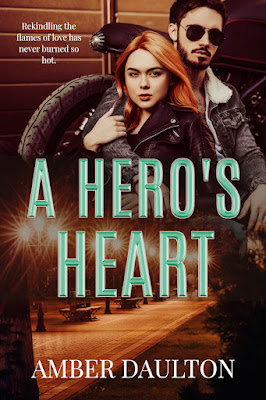 “I can’t believe you threatened Santa wouldn’t come if he didn’t go to bed,” Jarrett whispered as Marissa closed the door to Jason’s bedroom. “You’re a naughty girl for lying on Christmas Eve.”

She winked. “It worked last year and the year before.”

“I see. You’re naughtier than I expected.” He nibbled her earlobe until a sweet gasp escaped her mouth.

“Jarrett, wait. Not outside my son’s room. C’mon.” She dragged him into her bedroom and pushed him against the door. “You’re wearing too many clothes.”

“So are you.” He cupped her ass and dragged her up his body. Oh, hell. He’d never get enough of her. Those legs and her breasts—fuck. As she wrapped her long limbs around him, he seized her lips and pushed away from the door.

“The bed,” she mumbled the words against his mouth.

He laid her down and topped her. “Lift your arms, baby.” He jerked off her sweater and groaned. The overhead light cast a golden glow across her smooth skin and curly hair. A sexy red-and-green striped bra cradled her breasts. He licked one of her taut nipples from atop the fabric and moaned from the scent of sugar cookies.

Marissa gasped and arched her back, pressing her breasts against his face.

“You’re killing me.” He nuzzled her chest before sliding his hands to her back and freeing the bra clasp. Her breasts bounced free and grazed his chest. His cock throbbed so painfully against his zipper that he lurched forward and dry humped her.

“Like what you see?” Her mouth hitched up in a smile.

“Tease.” He glided his tongue across her other nipple.

He stroked the curve of her soft bottom lip. She swiped her pretty pink tongue over his fingertip, trying to draw it into her warm mouth, but he pulled back and jerked off his shirt. After he stripped off his jeans and underwear, she pushed him down on the mattress and swirled her amazing tongue across his chest. Ah, fuck. His muscles bunched as she trailed her decadent kisses down his abs and upper right thigh, circumventing his needy, straining cock. 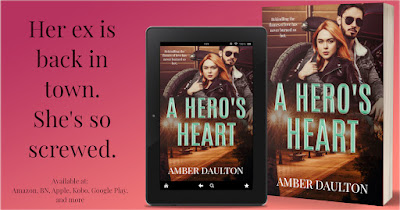 After an undercover mission goes awry, DEA agent Jarrett Brandt hides out in the last place he wants to be—his hometown. Now he’s stuck with his judgmental parents and the memory of his perfect brother hanging over his head. His one bright light? Marissa Reinn Brandt—his high school sweetheart and former sister-in-law.

Marissa lost Jarrett once before. No way will she let him back in; then her son offers him their guestroom. His wicked charm and smoldering stares are hard to resist, but she’ll make him work to reclaim his spot in her bed.

When his enemies close in, how will Jarrett keep Marissa and her son safe, or will he lose his shot at redemption?

Amber Daulton is the author of the romantic-suspense series Arresting Onyx and several standalone novellas. Her books are published through Daulton Publishing, The Wild Rose Press, and Books to Go Now, and are available in ebook, print on demand, audio, and foreign language formats.