Reuniting with the man who broke her heart has never felt so right. 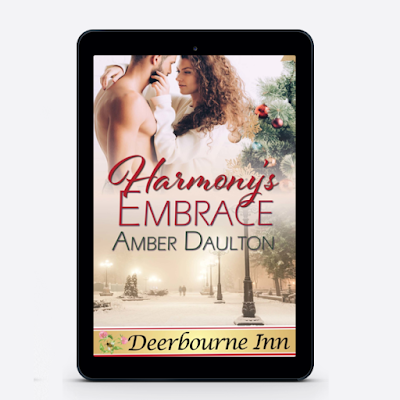 He sighed heavily. Snapping at her wouldn’t convince her to stick around. “Have you thought about me over the years?”

Her bottom lip trembled, then she sucked it between her teeth. “Of course I have. High school was a long time ago, and our dreams clashed. You wanted a laidback life, even though you cut loose with Susannah in college. I wanted big-city living, and I got it. I like it.”

“So a rich-ass condo means that much to you? You want a new job slaving away five or six days a week for some major corporation until you’re exhausted?” He silently cursed. Not only did he slave away at his job, he was growing more tired of it by the day.

In the back of his mind, he’d always believed he and Harmony would find one another again. Susannah and Claude didn’t compute. How crazy was that? Did he marry someone so different from himself because, subconsciously, he didn’t want the relationship to work?

A frown creased her brow. “I don’t need or want expensive things, but I like to work, to feel useful. My dream home is a little yellow bungalow with a big yard in a suburb.” She rocked in the chair as though she longed to jump up and run out the door. “I don’t want to argue. Let’s finish eating and hit the slopes.” She polished off her chips in a handful of loud crunches.

“What did you expect?” His throat constricted. “We’ve never hashed this stuff out since Susannah and Claude were always stuck up our asses. It’s time we deal with it.”

She scowled, then finished her grinder.

Birley gritted his teeth. Why had he been so stupid all those years ago? He’d wanted her to attend the University of Vermont with him, but she balked at another lengthy stint in school. He never should’ve walked off, leaving her crying on the porch of her parents’ house. She wanted time to think about her future—they’d only graduated from high school that morning—but her refusal didn’t mean she’d stopped loving him.

Too bad he hadn’t realized the truth at the time. She’d hurt his pride and broken his heart. Nothing mattered but hurting her in return. They avoided each other for the rest of the summer, then he headed off to the university.

God, how he’d missed her. She’d continued to work for her uncle while earning her accounting degree at a local community college and later moved to New Jersey for her job. Any chance of repairing their relationship had left with her, but by then, he was with Susannah.

Birley ate the rest of his sandwich, which slid down his gullet like cardboard. “No matter what you decide, I’m happy you’re home now.” The hope in his chest deflated. He stood and tugged on his gloves. “Let’s hit one of the blue squares. You okay with that?”

She nodded and followed him up. After they threw away their trash, they left the lodge. 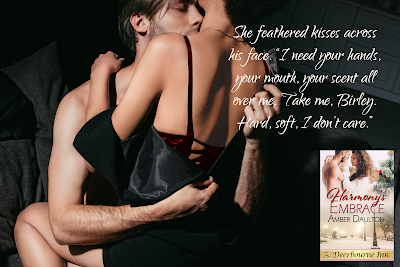 Divorced dad Birley Haynes is too busy raising his children and running his family’s music academy to start a relationship. Then Harmony Holdich, his high school sweetheart, returns home to Willow Springs, Vermont for Christmas and falls into his bed. She brings light and fun back into his life, but he can’t brush aside the threatening incidents around his workplace.

Harmony hadn’t expected a complication like Birley, especially so soon after the death of her unfaithful husband. With her life a mess, she plans to move across the country and start over. All she can offer him is a fling, but her heart yearns for more.

When the threats rise, how will Birley keep his children safe and convince Harmony to give love another chance?

Amber Daulton is the author of the romantic-suspense series Arresting Onyx and several standalone novellas. Her books are published through The Wild Rose Press, Books to Go Now, and Daulton Publishing, and are available in ebook, print on demand, audio, and foreign language formats.