The last thing she needed was a husband, especially some Viking brute commanding her surrender. 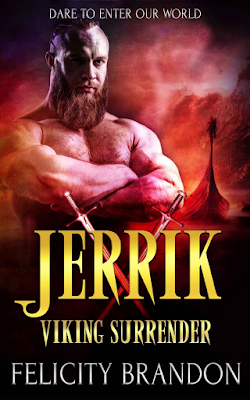 
“You can make it up to me later,” he demanded as he sauntered towards the place where she was still kneeling. “After I have punished you for defying me.”
Brigid panted at Jerrik’s assertions, and she drew in a deep breath, as if to compose herself. “I know I am your wife now,” she murmured in response. “But I am also a grown woman, Jerrik, and a mother. I cannot have you punishing me, especially in front of Bram.”
Her tone was laced with just a hint of insolence, and it was enough to stir his already unsatisfied cock.
“You no longer have the choice,” he reminded her flatly. “You’re my responsibility now, Brigid, and our children will be of my heritage. Your defiance will be punished. It is how us Vikings deal with such things.”
She dropped the vegetables and rose unsteadily to her feet. Brigid was trembling, and Jerrik wondered if it was fear that inspired the gesture, or something else. It had been some time since Brigid had been mastered, and he was starting to wonder if her first husband had ever truly done the job. He sensed there was a part of her that wanted to yield to someone stronger than herself, but the woman had spent so long being responsible for herself and Bram, she seemed to be struggling with the new power dynamic. Jerrik could understand that. He needed to guide her.
“What will you do?” she whispered, gazing up at him with anxious eyes.
Jerrik smiled, moving towards her and taking one of those small, cold palms in his hands. “Nothing severe,” he promised. “Just enough to remind you of your place.”
“The b-birch?” she stammered, barely able to articulate the final word.
Evidently, his little wife had quite the fear of the birch, and he mused that it would be worth remembering that for future misdemeanours, of which he was sure they would be a great many.
“No,” he assured her. “Not this time.”
Brigit exhaled in apparent relief. “Then what?”
Jerrik shook his head with a grin. “I had intended to surprise you with the penance later,” he said, dropping his tone as he inched towards her body.
“Please,” she replied, craning her neck to look up into his eyes. “I’ve never done this before, Jerrik. Bram’s father never…”
She paused, lowering her gaze.
“He never punished you?” Jerrik offered.
He wasn’t well versed in Pict traditions, but it seemed ludicrous that the man had done nothing to love or guide his spouse at all.
“He never really did anything to me,” she replied with a sigh. “Apart from the obvious—usually when he had consumed too much mead. So long as I fed him on time, he generally left me be.”
“I see.” Jerrik’s tone had lowered in response to Brigid’s description. He was pleased he would never have to meet this man and make him atone for his incompetence. It seemed as though there was already enough to be done.
“You’ll find I am quite a different proposition,” he told her. “I have high expectations of you, Brigid, but I will repay your effort with my sword and dagger which will protect and provide for you, and with my body, which will honour you. I’m sure you know to what I speak, but if there was any doubt, then I hope the last evenings have reassured you?”
Brigid sucked her lower lip between her teeth at Jerrik’s words. It was clear she did remember their unions of consummation. “Yes,” she replied in a breathy tone. “I should like more of that.”
Her face flamed at the admission, and he chuckled at her embarrassment. “And you shall have it,” he told her. “Just as you shall bear my punishment.”
She swallowed, but in those hazel eyes there was a flicker of acknowledgement. “Aye, well,” she murmured. “I will try and yield, Jerrik, yet I think I am out of practise.”
Jerrik grinned at the concession. “A good, hard, bare-bottomed spanking over my knee should help you to remember,” he drawled. “Do you not think?”
Her breaths were coming out in short, fast pants. “A spanking?”
He nodded. “Yes.”
Brigid closed her eyes at his edict. “Then please, Jerrik, do not make me endure it in front of my son. This is new to him also.”
Jerrik appraised her pained expression with interest. He’d never even contemplated the child witnessing her penance until now; in fact, until this morning, he’d never even contemplated having a child before.
“We shall find something to amuse him this afternoon,” he decided, raising his hand to gently tilt her chin in his direction.
The touch of his hand at her face drew Brigid’s eyes open in an instant, and for a long moment, their eyes locked.
“And once we are alone, you will learn how to submit, wife.” 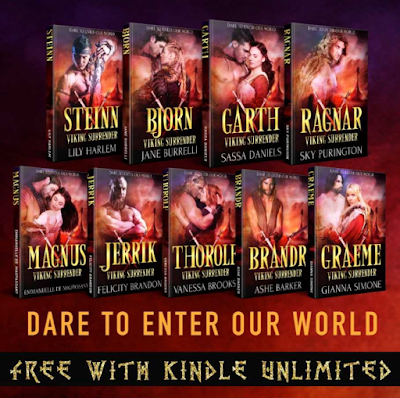 A Pictish village at the mercy of its enemies.

A harrowing bargain struck for nine fearful and reluctant brides.

Delivered into Viking hands, claimed and conquered, each bride must accept that she belongs to her new master. But, as wedding nights bring surrender to duty, will fierce lovers also surrender their hearts?

The Highland wilderness is savage, life is perilous, and the future uncertain, but each Viking has sworn protection, and there are no lengths to which a man will not go to safeguard the woman he loves.

Journey together with indomitable heroes and intrepid heroines, as they discover that the raging storms of fear and passion can transform into enduring devotion.

Forced into a union she didn't seek, Brigid is terrified and aroused by Jerrik's masterful behaviour and carnal demands.
But, when he saves her son from the ferocious ocean, Brigid realises he may be the hero she needs, as well as the man she craves.