My submission for this week is from my third spanking romance titled, Acting Lessons. 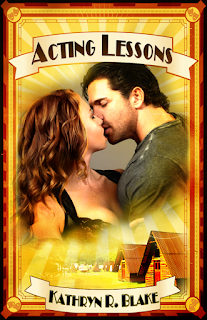 Setup: early in the first chapter, Peter Thorton is attempting to convince his wife, Kate, to give their marriage a second chance by signing her to appear with him in a College Summer Stock production of "Kiss Me Kate."  Kate isn't sure she can trust Peter with her heart again, since she believes he's been unfaithful to her, but she's never stopped loving him.  And though Domestic Discipline originally played a part in their marriage, their last two years together had them living like polite strangers sharing the same house.  Peter realizes he made a mistake in letting Kate do as she pleased, so he's determined to rectify matters. Kate, however, believed he was bluffing, so to prove his point, Peter takes her over his knee in her agent's office.  Wisely, the man excused himself and let Peter handle Kate as he saw fit.  However, after a few swats Kate realizes if she wants to be released, she will need to play by his rules.  At least for awhile.

"I asked you a question, so I expect an answer, Kate," he insisted, his voice firm with warning as he stroked her still-clothed backside.  In the past, he'd always delivered his punishments on the bare, but her agent's office didn't provide much privacy.  All the same, he'd warned her, which meant he would lower her pants in a nanosecond if he deemed it necessary.
Despite his gentle stroking, she could tell by his tone of voice he wasn't going to let her up, yet.  So, she'd say whatever was needed to get him to release her, then she'd have his ass thrown in jail for abusing her.
"Yes, I know I can't win," she answered finally.  "You are much stronger, so in a physical contest I am no match against your superior force and will."

Kate's is not in an enviable position at this point, even though Peter desires her agreement to his plan.