She is committed to serving her country. He has other duties in mind. 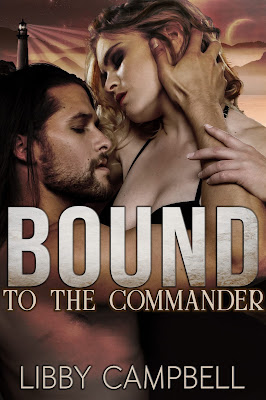 “What do you think you’re doing?” a man said from behind her. His voice was as deep as thunder, authoritative, and vaguely familiar.
Pepper smoothed her lavender midi-dress and tucked a loose strand of hair under her modesty cap before turning to face him. Her hands went cold when she saw who had spoken.
Looking down at her from a lofty height stood a stately man, a blue-skinned Devmaerean. He was dressed in the gray uniform and shiny black boots worn by all male members of the country’s ruling Tribunal. But the red cuffs on his jacket and the scarlet scarf at his neck were worn by only one person: the country’s leader.
Commander Quinn Garrick’s face was impassive, and his amethyst eyes glittered with something like amusement. “Are you planning a burglary?”
His rich voice made Pepper’s insides tighten, but not from fear. The hair on her arms stood on end. Her toes curled, responding to his aura of power and authority. She couldn’t take her eyes off him.
Her face burned with embarrassment at her body’s primal response to him. Wasn’t she the woman who could say no? And usually did say no. Wasn’t she the one who was rarely tempted by desires of the flesh?
Until now.
Her breath came fast and shallow as the axis of her world shifted.
“Uh. No, sir.” She gulped.
She glanced around for the Tribunal Guards who should have been close. Curiously there were none nearby. Neither was there was a film crew on hand, recording their encounter. It was just the two of them standing in front of Lily’s place.
Pepper swallowed as icy fear edged out her initial sensation of lust. The commander was known to be a rigid enforcer of the rules that made their country safe and stable. And he’d just caught her peeking into a house that wasn’t hers.
Dread fluttered in her chest. As she broke eye contact with him, she noticed the broadness of his shoulders. A cinched belt emphasized the trimness of his waist. She glimpsed the healthy bulge at his groin. In spite of herself, her fingers twitched at the thought of touching that beautiful muscle, teasing it to its magnificent fullness. His strong thighs flexed under his tailored trousers.
“Step out of the flowerbed, please.” An order disguised as a polite request.
Pepper’s heart tried to hammer its way out of her ribcage as she moved onto the lawn.
“Please look at me when I’m talking to you. What do you think happens to burglars?”
She raised her eyes back to his and shrugged.
He folded his arms, nodding at her to speak.
“Detention?” Her voice squeaked, betraying a mix of fear and wonder.
“At the very least. Women offenders often get the switch.” The corners of his mouth twitched in a small smile.
Flames of embarrassment burned up Pepper’s neck as she imagined this man baring her bottom to stripe it with willow branches. Now another part of her body was swelling and clenching. As his eyes bored into her, she dropped her head to study her feet. The toe of her right boot was muddy from the garden. She rubbed it against her left ankle.
“What do you have to say for yourself?” Before she could answer, he said, “Let’s start with our names. I’m Quinn Garrick, Commander of Elsinania.”
Everyone with working eyes and ears knows who you are. Pepper bit back the sarcastic reply. The man appeared hourly on the viewing screens that ran nonstop in all the public buildings in every street in the entire country. “I’m Piera Elin Thornback, massage therapist, citizen grade four. People call me Pepper.”
He nodded again, indicating he expected more of an explanation. She wondered if he would demand to read the CitizenBand on her left wrist. The fine gold and silver bracelet carried her name, address, education, occupation, blood type, along with the day of her last cycle and the fact that the contraceptive option had been activated.
“It’s my sister, Lily. I can’t wake her.” She jutted her chin toward the window as her voice drifted off. Somehow her explanation sounded flimsy when spoken out loud.
“Let me have a look.” He touched her lower back as he stepped around her. As quickly as he removed his hand, she wanted it back on her again.
Pay attention. She noted the way he didn’t have to trample the garden to get close like she did. He was tall enough to see in the window from three feet back.
As he turned, she saw that his thick blue hair was tied back with a leather thong at the base of his neck. The length of it took her breath away; it was almost as long as hers.
The Handbook for Proper Conduct, which set out the rules every person in Elsinania was supposed to live by, decreed that men’s hair shouldn’t reach past their shirt collars. Quinn’s would fall to his elbows when it was untied. Members of the Tribunal made rules; they obviously didn’t follow them.
“There’s no one in there,” he declared, regarding her with a look of gentle concern.
Suddenly the autumn sun felt unbearably hot. A bead of sweat ran down the back of her neck. She longed to tear off her modesty cap, loosen her long heavy hair, and let her scalp breathe. 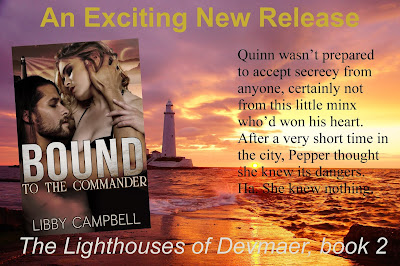 When rumors of twenty-three-year-old orphan Pepper Thornback’s incredible healing abilities reach the ruling Tribunal, Commander Quinn Garrick sets out to bring her to the capital. Pepper is given no choice in the matter, and when she attempts an escape during the journey she is taken over his knee for a sound spanking and then stripped bare for a painful, embarrassing switching.

More humiliating still, upon reaching their destination Quinn informs Pepper that she will be his ward for the duration of her stay and he will not hesitate to deal firmly with any disobedience.

Despite her blushing indignation at being treated in such a shameful manner, Quinn’s stern dominance arouses Pepper deeply, and when he takes her in his arms and claims her properly she is left utterly spent and satisfied. But when Pepper makes a shocking discovery concerning the fate of her parents, will the revelation strengthen her bond with Quinn or tear them apart forever?

Publisher’s Note: Bound to the Commander is a stand-alone sequel to Bound to the Admiral. It includes spankings and sexual scenes. If such material offends you, please don’t buy this book.

Learn more about the planet Devmaer and its sizzling people with the prequel novella Bound to the Past. It’s available FREE at all major ebook sellers.

Time Travel:
His Land, His Law
A Time For Will

My romance novels feature strong, self-reliant women and the powerful men who love them. Romantic by nature, I write the stories I want to read: those that feature a spicy power exchange and deliver a sting in the tale.
Canadian by birth, I also lived in Australia for a couple of decades. While living there I overcame my aversion to saucer-sized spiders and, as a condition of marriage to my Aussie Prince Charming, I swore a lifelong allegiance to the Melbourne Football Club.
Then family called and my husband and I packed up and moved. We now live on a rocky island on Canada’s West Coast, close to beaches that once were frequented by smugglers and rumrunners.
My passions are reading and writing. I adore all animals and love hiking, beachcombing, and an occasional night of dancing.