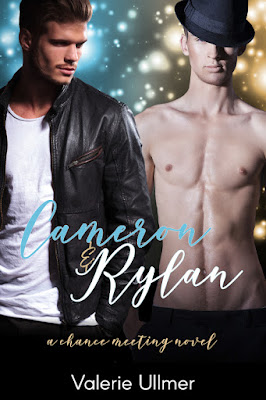 
“Are you okay?”
Rylan swallowed at Cameron’s concern and nodded.  “Are you sure you still want me to move in?”  The look of concern on Cameron’s face made his throat feel tight.
“I want you safe but more than that, I want you in my life.  I still want you very much to move in with me.”
“Yes to both.  I… I want that.”
Cameron’s gaze dropped to his mouth and paused for a long minute before he met Rylan’s gaze.  “Can I kiss you?”
Oh, yes, please.
Unable to force the words past his throat, he nodded instead.
Rylan not knowing what to expect, couldn’t prevent the shiver when Cameron cupped his face.  He moaned aloud when Cameron’s lips grazed over his lower one.  Cameron took his time exploring, searching and yet not deepening the kiss as he passed over Rylan’s lips with his own.
“Rylan,” Cameron breathed.
“Please.”
That one word was all it took.
“I’ve wanted nothing more.”  Cameron tilted his mouth as he pressed their lips together, causing Rylan’s entire world to tilt on its axis.
Rylan gripped Cameron’s hips tighter in his hold, pulling him closer, as Cameron slid his tongue over the seam of his lips, asking for permission to enter.  Rylan eagerly opened, savoring the taste of peppermint and black coffee as Cameron deepened the kiss and stole Rylan’s breath in the same moment.
When they broke off and dragged in deep breaths, Cameron moved his lips behind his ear before he explored Rylan’s neck.  Rylan tilted his head back, giving him access and drawing sensations from his untried body that left him throbbing.
Rylan never knew his neck and the area behind his ear would turn him into mush.  He bit his lip to prevent a moan from escaping his throat, but Cameron bit his earlobe and spoke.
“Let me hear you.”
“You’re driving me crazy.”
“Now you know how I felt the moment I spotted you on the dance floor.  For me, that’s saying something.”
Before Rylan could form a thought to reply, Cameron moved his mouth over Rylan’s and he lost himself to the sensations that shivered throughout his body.  Cameron’s growl absorbed his moan as he deepened the kiss, pulling him closer to his hard body.
Rylan’s eyes fluttered closed, unable to keep his eyes on the sexy-as-sin sight of Cameron’s flushed face.  The kiss turned into an inferno and Rylan could feel his cock swelling in his sweats and he knew if Cameron stepped closer, he would experience Rylan’s excitement first hand.
He opened for Cameron’s exploration and instead of the intense sensations of an aggressive kiss, Cameron’s slowed his movements as his tongue explored him until he was panting and all thoughts disappeared.  There were only the sensations Cameron drew from him. 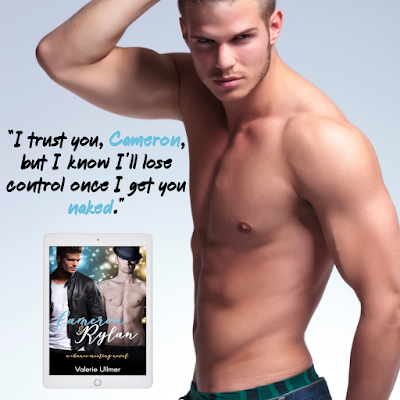 Cameron Hayes believed himself to be a dedicated friend and a good son but destined to be alone.  Because in his twenty-one years, he’d never fallen for anyone.  Dating never appealed to him when he would rather spend a night at home.  Despite his friend’s best intentions for Cameron to find a hookup for the night, he stayed at the bar as he nursed a beer.  And that’s when Cameron spotted him and everything he knew evaporated with one look.
Rylan Ellis wanted one night out without complications.  To forget about his overwhelming responsibilities and stress at home.  He loved to lose himself in the music and ignore everyone around him.  But when he happened a glance at the bar and spotted the tall, broad, and sexy-as-sin man, he felt drawn to him.
Soon, Cameron and Rylan learn about each other and establish their lives together.  They also have to deal with a group of well-meaning friends, loving parents, and unexpected friendships.  But most of all, a dangerous threat that could tear their lives apart.
Will a chance meeting turn into something more?
This novel contains heavy attraction at first sight and first-time gay sex between two men.  There is no cheating or cliffhangers and ends with a happily ever after.